Overcast, but still 55kms to Avila.

An early start in overcast with our gaggle making its way slowly and little more  than take off altitude towards the Pass.  Some decent climbs around the Cemetery and Conical hill took 7 of us over and to around 45 with Koen making the best and making Avila.

An unusual weather day with the passage of a front but leaving good evening soaring for the new arrivals.

Saturday 17th August: A great day with climbs to 3700m earlier on.  Many went down near la Torre, However, Esa, Martin, Steve and myself carried on.  A bit North near Segovia with Steve falling just short of the goal.

88 and 87km (nr Villacastin) for Toby and Maarten. Many others at Avila.

A good day with climbs to 3000m.  5 down just before Pass, but most others made it to Avila and beyond, with Maarten and Toby past Villacastin and Hans near Windmills after Avila.

A very nice day with light winds from the N.  Busy at take off with the HG competition also present.  Most had a gread day with strong climbs and best flights by Hans and Steve making  a circuit to the Pass, Barco then home.  Around 70km.  Also fantastic evening soaring. 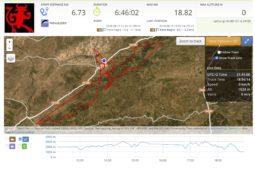 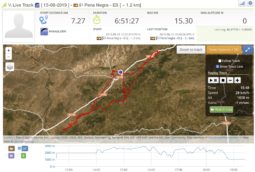 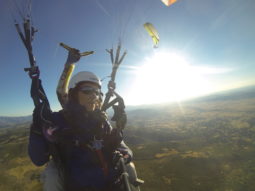 Tuesday, 40 to 60km circuits to Pass and N. of Valley. Wednesday Avila Goals

A pair of nice 3000m days with very light winds allowing a circuit and goal flights into the Avila Valley.

Saturday 10th, one over Pass. Sunday Local and Monday evening only.

Goal for Beat and a PB at 112kkm for Earl.  Me not far behind Earl then Ana near the 100km Mark with Graham around 70km and Stev B in Avila.  Quite tricky take off conditions with a lateral wind which did not come on well to the main launch so we used the grassy launch some 400m to the East.  Unfortunalely not all got off as the wind became more crossed there too.

Thursday. All over Pass and bombed. Friday, Biggish circuits around valley.

Thursday gave us nice conditons after take off with climbs to near 3000 before going over the Pass, but we all bombed out on the other side in rather strong winds in the Avila valley.  Friday, great climbs, light wind and circuits around the valley towards Pass and north of Valley.

North of Avila for Ana (70km+) and a reserve throw for Martin.

Rasp perfectly described the day, with wind coming on hill around 2pm and a swing to the NNE after the Pass of the convergence with a strong SE east of track.  Sofi, Dimitri, Colin, Ana, Martyn and myself crossed the Pass, myself with a gaggle of sailplanes at 3500m.  Unfortuntely Martin (Mantra 6) had to throw his reserve  near Amavida, coming down safely in the hills beneath the Windmills.  Most of us landed to help, but the police were there before us and brought him down to meet us at the Cafe at Carrascalejo.