Artwork for Aerothlon in Mexico

I had a commission last week to do a banner design for the Aerothlon sports events in Mexico in Ensenada, Baja California.  The event is a race on bike, paraglider and foot, so all these had to be included in the image.  I initially went with a design incorporating the village, but was later asked to do more of a desert feel.  The colour sketch below was approved.  I was also asked to include a caricature of Pal Takats, who in the final image is the character who is landing.  Here is a bit of detail from the final image, and also the rough sketches.  Unfortunately just as I was finishing it seems the Government of the area have refused permission, so I will probably have to adapt the background at some future time to the Valle del Bravo. 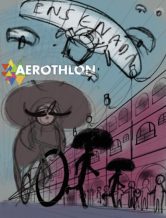