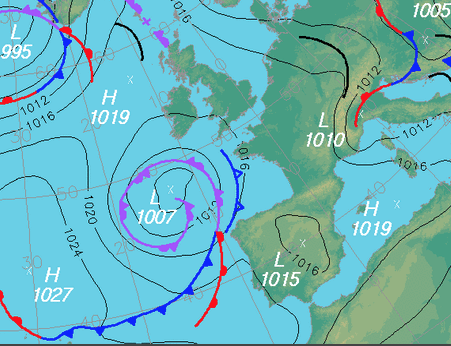 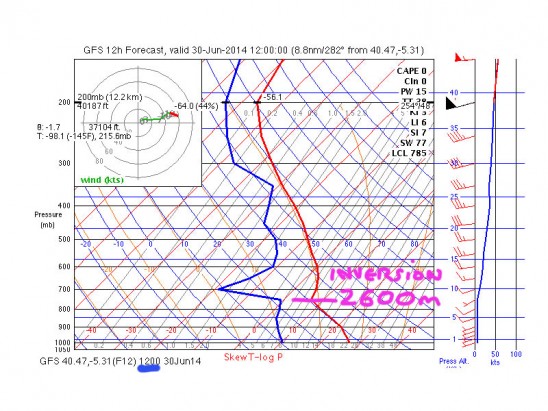 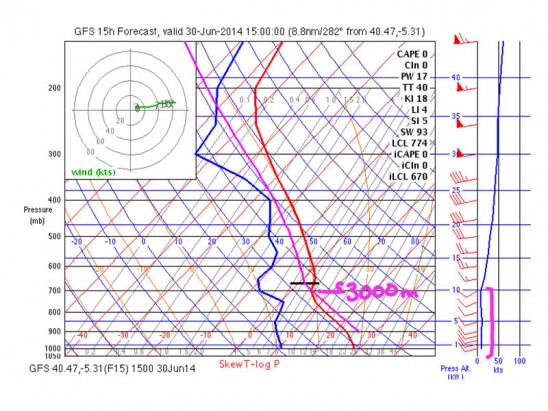 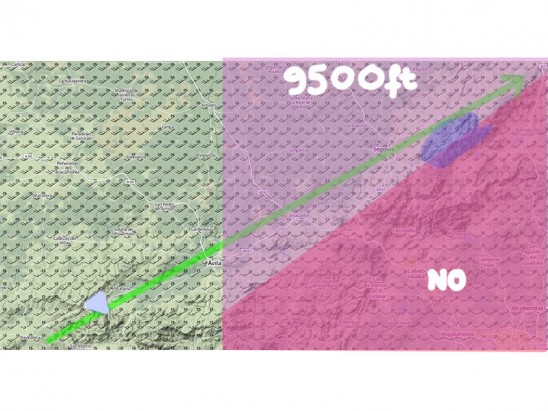 Another low pressure system is approaching the NW of of the Peninsula which will complicate things for the next few days.  However, as is often the case, these prefrontal days often serve up the very best as for as big open distance cross country flying.

Today we have a SW flow which should allow us to take off at Peña Negra.  However, there will be a fair amount of turbulence close into the hill so I would be reluctant to do any form of turn points along the ridge and would strongly suggest a distant goal with minimal turn points as the wind is going to in excess of 20km/hr at most levels.

The SW direction will give us Convergence conditions for much of the track.  This will be BLUE convergence so may not be that obvious to you, but it is likely to be displaced to the North of the N110, and much more so after Avila.  The consistent direction and strength of the wind will also favour thermal streeting.

The Villatoro Pass is obviously a problematic spot due to increased wind strengths due to compression at the mountain there.  Be very away also that in the flatlands immediately after there will be a strong down flow with a west wind causing thermal suppression , turbulence and the strongest winds in the plains at the outflow immediately on the lee side.

Some of the Terrain immediately around and after Avila is a little limited for landings so try to get at least those 500m to stay legal and pass it with more security.

The Mountain section just after Segovia can catch you out.  It is far safer and better (if there is convergence in the flats) to stay out from the hills here.  There is an extended part of the mountains which is unlandable which you may be tempted to skip across.   Best not to really unless you life lacks excitement.

The thermal tops are not much over 3000m, so it should be easier than it often is to stay withing the limits in the madrid Notam area (9500ft).   There is also a square are called Baterias just to the SE of Segovia which you should be careful of as it extends from the ground to above our permitted height. 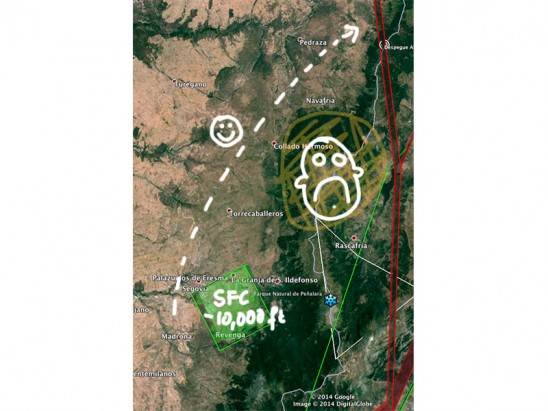 To Race to Goal or use Elapsed time

Although not popular this may be the best option for the day due to the problems with hanging about on a windy turbulent ridge with weak conditions early on.

Advantages of a race are that we can wait in the air until conditions are good so more can cross the Pass with altitude.  The problem will be if it is difficult to maintain and pilots are swept downwind in weak thermals with no chance of getting back upwind to the start point.

This is our best chance of a big distance flight for the next few days so we should seize the opportunity and do a big flight with a goal in Arcones (or more if you wish).   No fussy turn points, just get int he air as soon as possible before it blows out and get on your way with and elapsed time.  Simple!

Good luck to you all for what ever is eventually decided.

Good start with multiple clock race start, so almost elapsed time.  quite gentle early on, and at present around 8 in goal (via air tribune), but more I imagine amongst those without mobile tracking.  A great day for many.