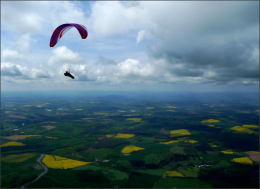 Back to 30ºc + heat, leaving a rather poor run of UK weather, though it was not all bad. I took along a new Skywalk Cayenne 4 (S) which I had been hoping to get some decent airtime on. I had also tried getting my hands on some other new C class gliders but most demos were at an event in Ager.
On the first day Paul Russell and I met up with the Avon crowd at Westbury for a non sunshine but highly thermic 2 hours of great flying. My first English pint and a bag of pork scratchings with Pete Douglas and Alex Coltman. (Thanks Pete, a very memorable pint indeed).
The next day we braved rainshowers to visit Ubley, one of my favorite sites ever, though now in dispute with the new landowners. A hike up with Ken Wilkinson, Ian and Paul R, though only myself and Ian flew. A nice hour getting to the low cloudbase of scutting low murk.
Saturday Paul and I drove up to stay with Bryan and Pat Hindle at their hillside house on the E face of the Malverns waiting for Big Sunday. I was so excited on Sunday morning I pretty much ran up to launch. Loads of familiar faces up there and also familiar voices on the radio throughout the day as we flew towards the SE Wales sites. The rather deep cumuls soon formed snow showers at altitude and by the time we reached the Skirrid their was little sun to be had. I managed to get high near Abergavenny and flew across to the Blorenge and went a little south while waiting for Bryan to get up along with a few others including Tim Penreath and Ken Wilkinson who was doing a triangle from the Blorenge. At this time rain and shadow along the high ground made it look like we might land at Abergavenny for an easy train ride home. Paul had already landed at the Hay Bluff, havig taken a N route around the airspace E of Pandy. However, there was some brightness opening up S of the Black Mountains, so we made our way towards Brecon. Bryan got behind after getting sunk out near the snow flurries and I met up with Guy Anderson briefly near Brecon. I spent an hour more flying from one bit of good sky to the next, dodging the snowfall and bomb outs in the wilderness to finally land after 6 hours and a little over 100km with TPs at Sennybridge. The glider was exceptionally easy tio fly and light and precise My Zippy harness is finally beginning to feel a little more normal, and for the following 3 hours of hitching and walking, the lightweight of my new gear was a great relief. Back at Pat and Bryans by 9pm and it seemed that I did not turn on my tracker correctly, so no track log or live tracking (Pat was following our progress throughout the day… according to the trackers Bryan and Paul had excellent XC flights, but I was at take off all day!). ( The photo at the top is by Colin Hawke as we were crossing the River Wye)
Rain for the following days, though we did pop in to see the Mayor of Malborough and TV sites officer, Alexander Kirk-Wilson and later have little unsatisfactory stint at Milk hill.

Weather looking good now here in Piedrahita for the weekend and week to come. Loads more toys to try (my new Tandem wing and Tandem harness) and a Factor 2 demo. However, I was so delighted with the Skywalk I have bought it and look forward to the next 6 hour epic with it; though without the cold and snow next time I hope.
Bryans flight and hitch and Train ride to Hereford below.