I am writing this post while there is a howling wind and persistent rain outside. A very miserable autumn day indeed, which has made me think of the beautiful weather we enjoyed less than a month ago, when the ladies and gentleman of the Spanish experience week came to visit for a second time.

When the spanish class group from the Malverns (plus scottish Jean) asked me again this year whether I could organise another week for them in october I thought I wouldn’t find enough activities to keep them ocupied and topics to discuss. I was wrong. We managed to have another successful week full of spanish experiences.

This year Sylvia couldn’t make it and Jean Bull, a retired Malverns College teacher, took her space. The others were the same as last year: Pat, Mary, Liz, Neville, Gillian and Jean. They all came to practice their spanish once more and enjoy the local culture and landscape.

The first morning we did the usual introductory lesson and we practised common situations dialogues, both in formal and informal environments. I was determined to speak more spanish this year than I had done in their first visit, and I did try to stick to it at least during the morning lessons. We went for a walk in Barco the Avila in the afternoon, and had dinner at the family home in Zapata in the evening. 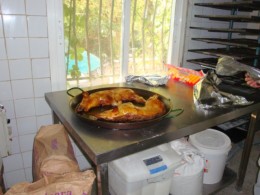 ay I had a job interview in Avila in the morning,  so Steve took over the food lesson, and they all managed to do the shopping in the market rather efficiently. They bought all the ingredients for a feast which included a suckling pig which we seasoned and took to the local bakery to be roasted. The baker gave us a little talk about local sweets when we went to pick it up later that day. We had a very succesful dinner of Barco beans and Cochinillo, and by the end of the meal we were all very full indeed.

On wednesday we had a very intense lesson about spanish literature, and later went on a treasure hunt in the palace gardens, where we went looking for local tree species to show us the way.

The next day we travelled to the Sierra de Francia area to spend a couple of days exploring its villages and enjoying its beautiful landscape.We started with lunch in El Casarito, sitting outside e 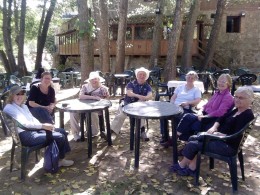 njoying the smells, the food and the company was for me the higlight of the week. That afternoon we went up to the top of Peña de Francia to see the monastery and the stunning views.  We spent the night in the picturesque village of La Alberca but did also walk around Mogarraz and medieval Miranda del Castañar the next day.We visited the crafts museum and an old vine cellar to know about all the ancient traditions, and did a fair bit of shopping too. To end the tour we had a olive oil tasting and a very intense chat about olive oil production. All of this was blessed with some fantastic weather, which allowed us to sit outside in a very relaxing mood.

For the last day we went to Salamanca to visit some of the places we didn’t have time to see last year , like the Casa de Lis museum and inside the Cathedral. We had lunch in the square and went for a walk in the old quarters afterwards but unfortunately the cathedral remained closed this time as well. Maybe a good excuse to come back again…We had dinner in our place for the last night and everybody, including me, was looking very tired.

We still had time to spend a few hours in Avila on the next day before heading to the airport for the flight back. A walk along the Avila walls for some and a last group lunch together. We took the scenic route to Madrid and visited the imperial village of El Escorial with its impresive Royal Palace. That day was so hot it felt like mid-summer…I expect it was a bit of a shock to arrive in wintery Britain well past nidnight.

I want to thank everybody in the group for being such good company, for your patience, for enduring my hiperactive moments, for all the laughs and all those blank faces looking at me from time to time. It is fantastic to see people that enjoy life so much as you do.

One Response to “Spanish Experience Week 2011”