We beat the forecast with the early flights

The day dawned blue and Cus started forming from around 10am.  We made a very pleasant first flight, which was gentle but easy to stay with…though Brian lost his climb and landed short of the landing field. 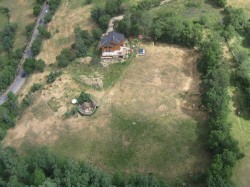 The photo below is of our new house taken on that flight.   The second flight was similar but with increasing Cirrus comming in and the Cus developing more depth.  An easy flight to the Quarry, and just as I was radioing to Pete that we were landing near the Cemetery, Brian pulled out a low save taking him quickly towards the Pass.  Unfortunatel the wind had now picked up and having lost the thermal he had to land in turbulent conditions in a less than perfect spot.   I followed above then landed in a slightly better spot nearby but with plenty of wind as well.

This week flying alongside our very small group is Sandy Cochepane´s group from Chamonix (X World Champion and Winner of the Europeans in Piedrahita in 1998).   The picture shows them taking off for theie second flight.  You will see from the photo that much of the mountain now full of the yellow Broom flowers.  Every themal on the hill is a fragrant one. 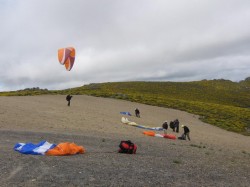