A Good Season With An Unpromising Start

At this time of year when getting out for some quality flying becomes more and more difficult, it is a time perhaps when we spend more time reflecting on the good flights over the past season and planning future XC adventures.

The 2008 season in Piedrahita has been one of our best since we started in the early nineties. For most of the season we were fully booked and blessed during summertime with very consistent weather with only a few days lost to inappropriate weather. However, saying that, May was uncharacteristically poor, with all the rains which normally occur in April falling in May, and in such a way as to break all recorded rainfall records for that month going back over 100 years. 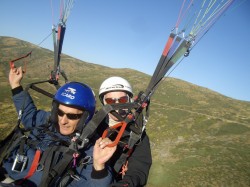 There were some very difficult weeks during that time, and the extent of the rainfall made even our normal non-flying springtime activity of White Water rafting and Kayaking difficult due to the torrent of water descending the River Tormes. The Sussex group had a particularly bad weather week and were taken almost beyond their limits for Cultural/ historic tours. However, all members of group came back later in the year to enjoy the more normal central Spain conditions. Our special thanks to Catherine and Garry from Lewes who came back twice more, spending a total of 3 weeks with us over the season, only topped by our star client of 2008, Colin Hughes, who over 3 trips spent 4 weeks with us.

The year provided us with many epic XC days; curiously most seemed to occur on Mondays or Tuesdays. On Monday 30th of June Bruno Croué made 247km from Peña Negra, beating my old site record by 3km. One the same day Mike Thomas, with Catherine and I on the tandem, arrived at Avila very high and early in the day. We decided to land as Mike was bursting for a pee, and there was a new airspace restriction 5km after Avila which gave us some concerns (now no longer a concern). A shame as a 200km on the Tandem flight would have been probable with the amazing conditions. 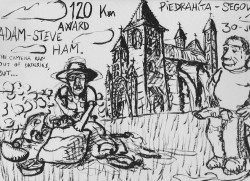 July and August gave us the usual high cloud base and reliable flying conditions. We made plenty of flights to Avila, perhaps the most noteworthy being John Kingsley from the Malvern club flying his DHV1 glider. It was also a day when we could have gone a lot further if only John had flown with replacement batteries. Another very memorable day was with the Dunstable group when Adam and I arrived over the City of Segovia at 120km at around 7pm. I forgot my camera that day, but Teclas made a good sketch to capture the moment , and also one of Graham, who on the same day had a wrestle with a cravat on his new glider preventing him from also reaching Segovia .

September gave us good reliable conditions right through to the end of the season. UK pilots may have recognised a photo by Peter Myles (our resident photographer for much of August and September) of the Manx group flying in Chia at the end of the month in the two page contents spread of the November edition Skywings Magazine. Many of Peter´s photos are in the gallery on the web page, and also we have all the group photos for 2008.

The End of the Season

By the third week of October the bad weather arrived, but of course our season had finished by then. As you may know the rains here generally fall in October/November and in April. This year there was a weather pattern shift in May, but hopefully that was an anomaly, because for me May and early June are the prettiest times to fly in Central Spain.

During October I have taken my honey harvest and am now preparing Mead and Orujo de Miel (Hot Cross bun Snapps) for next seasons group meals. Our house project is advancing very slowly, but we still hold out some hope for our move next spring. Now the worse of the rains and snows have gone, we are trying some walking routes (see Puri´s walking page for weeks in 2009: and investigating some other possible southerly take offs for next season. The scenery at the moment at its most spectacular, with the peaks covered in snow and the forests with their autumnal colours. 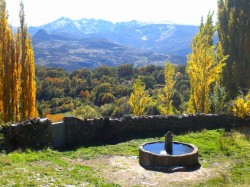 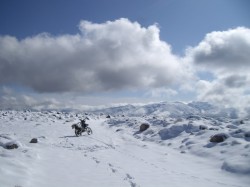