Nice to begin with! 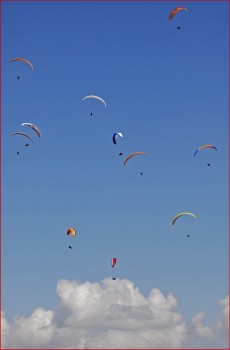 A 60km valley race was set, from Corrals to the start near take off, then corrals, Hoyoredondo, Bonilla, red rood, then goal near Piedrahita. A classic looking Cu filled sky until around 3.15pm, but all the while large congestus clouds forming on the plateau behind, with rain falling beyond Chia from around 2.30. Conditions along the ridge were quite gentle, with cloud base around 2500m. With the leading pilots closing on the Hoyoredondo turnpoint, the task was stopped at around 3.21. This was just nine minutes short of getting in a validated task (the rule is that the race must run for 90minutes after the start gate is opened. There was grumbling from some during the briefing that the original start gate open time of 1.40pm was too early to allow ALL the pilots to get to the start gate. If we had run with the original start time the task would have given the German league their first valid task of the year. I wish people would realise that tasks are often designed so that not all the pilots will be at the start gate on time. I would normally work for just the top third to the there. If all are there then there will be a safety crowding issue. By making pilots fly a good number of kms before the start gate we ensure two safety factors. Spreading out along course, and getting pilots off the hill early before stronger launch winds and possible later cancelling due to deteriorating conditions. So, by being foolishly democratic and allowing pilots too much say in the task (extending the race start to 2pm) led to the loss of a task being valid. Anyway, a nice few hours of flying anyway!

2 Responses to “Nice to begin with!”