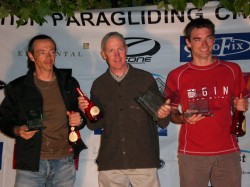 Strongish northerly winds this morning, which often mean turbulence around the take off areas which protected in the lee. An 64 km task flying south and then two cross wind legs over the north side of Talavera with goal at a large junction to the NE of Talavera.

The start gate was 10km from take off out in the flats, and things there were not working so well with pilots in survival mode in the weak conditions. An early important landing was Adrian Thomas, who had been lying in second place. As we struggled towards the higher ground things picked up, with good climbs to base. The cross wind glide across Talavera must have been spectacular for those in the city below. Once we reached the foothills to the north of the city, it was an easy romp around the last turnpoint and into goal, the final glide crossing directly over Wellington’s 1809 battlefield.

First into goal was Mark Watts, with his second task win, closely followed by Craig Morgan, who with this result overtakes Mark Hayman in the overall result. With my arrival, I maintained my overall first place in the Serial Class