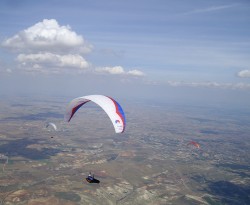 A great day with a straight line race to the south of 75km. After once again much discussion at take off on a possible task, the original plans were scrapped as the Spanish pilots normal route for such conditions ran through the Madrid airspace. With the help of Alan Davies and his up to date airspace garmin, I plucked out a possible goal to the south which looked landable and achievable. A fantastic run with climbs to around 2400m across the flats of Castilla de la Mancha. Similar landscape to flying from Piedrahita, but wonderfully unrecognizable and different for me. The goal was a village called La Puebla de Montalban some 20 km east of Toledo. First into goal was Mark Watts in a time of 2 hours 35min, followed 50 seconds later by Craig Morgan. I bimbled in with a time of 3 hours1 minute, and there were at least 15 (probably more ahead of me) and many more arriving after I jumped on the goal bus back to PB. tomorrow maybe difficult weather , but from then on looking better well into next week. Maybe the normal spring conditions are finally arriving.