First day of the new season.

Certainly not the first flight of the season, since we have been getting some epic flights of late.  However, we have opened a bit earlier to fly with Florian.  Florian came in late this morning after his flight from Dubai (he is an airline pilot based there).  At around 1.30 we took of and within 15 minutes were at 3100m moving off to the west.  We flew for about 1.5 hrs landing around Barco.

The evening fligh one of those classic restitution smooth flights with lift all over the valley until sundown.  A nice start. 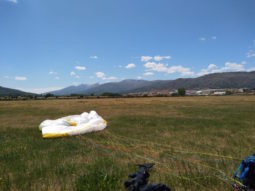