with a clear convergence set up to the NE we set a declared goal at Medina del Campo. From quite early decent Cu was setting up along the convergence, with initially a bit of a blue gap from the P N mountain across the Valley. After gaining around 2600 we moved down the ridge and on gaining around 2800 made for the beginning of the convergence induced cloud street starting a little beyond the Long Bar. We were soon at the base around 3200m and the rest of the flight was reasonably simple.
Most of our group were well along the track with SinGas landing 6km short.
Personal bests were:
Anton (Factor) 103Km declared goal
Steve N(Mentor3), 80km
Pete (Mentor3)72km
Chris (Iota)79km
Melle(Buzz( 80km (his 2nd PB of the week, stopping only because he needed a pee) 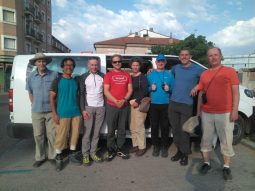 The Goal group and SinGas(6km short) at Medina del Campo 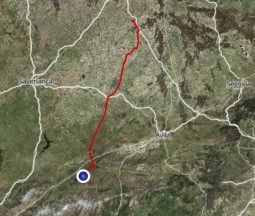