Flying with the legendary Bill Moyes

Back in 1990 I made a trip with Avon club members Mark Haycraft and Chris Jones to Australia where we ended up being invited by Bill Moyes to his weekend home in Newcastle. Bill was very generous with us and took us towing with his equipment: A speedboat with a long length of line and a float and attachment ring at one end joining to a rather battered old Hang Glider. He was amused that we wanted to wear our helmets, the water being soft in his opinion. He decided that Chris, who had long hair and was a vegetarian was unlikely to be much of a pilot so he was confined to the boat. I was first up on the tow. No radios, “just lift your leg when you want to go”. The speedboat would power off and the coiled line would whip away until no slack was left, jolting you off into the air.

Just great, climbing out over the bay with one of the most famous names in hang gliding below in the boat. Unfortunately, when I released the catch jammed in the release mechanism, leaving me with what looked like half a kilometer of line attached to me and the boat. With no radio contact, I believe I agitated my legs a fair amount to convey my dilemma. The likelihood was that as the boat slowed the line would go into the water dragging me down into the ocean. Oh dear!. However, Bill kept on the power taking me out to a sand spit where he gently backed off the power, me keeping the line taught and landing with all that line attached. Phew!

The next day found us at a different launch point with the wind coming in from the side, the longshore drift going another way and the boat speeding off in a different direction with myself watching the line rapidly uncoil on the beach and having to make a rapid decision as to which way to point the glider. I made a rapid calculation of the 3 vectors and pointed where I imagined I should….Wrong!. Chris, in the boat, told me that Bill had actually seen my error, but he thought it best that I should learn the lesson by being dragged a high speed across the beach breaking uprights and patches of skin away.
All this was around 3 decades after Bill’s pioneering flying. If things were hairy then back in the late 80’s one can hardly imagine the risks he was prepared for in the 60s.

I briefly met Bill at an FAI meeting some years ago when he was receiving his award. I don’t think he remembered our stay with him. He has had so many POMs coming through over the years. Mark continues to hang glide and seems to be always winning the French XC league. Chris is also still flying, both Hgs and Pgs. I carried on crashing hang glider for quite a few more years, but now just paraglide. 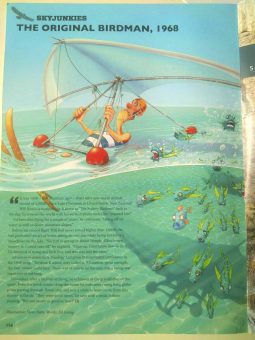 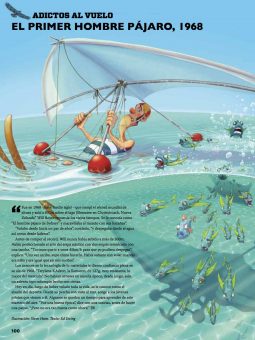