The meteo was spot on yesterday.  Both Ian and Johan achieved the goal and Tordesillas.  Placed just short of the Valladolid airspace.  A spanish pilot , Godo, made an open distance of 348km landing not far from the Cantabrian coast.  A new European record I think, and about the 4th or 5th claimed from our local Lastra site over the last 25 years.  Below are Johan and Ians track logs, both following the predicted convergence. 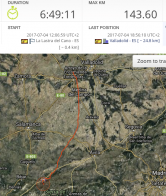 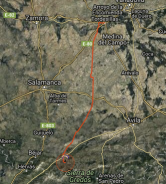