I won’t be going, but I think I would like to so that I could be at Calvo´s final comp as a Meet Director.  If you are new to the British Open series you may not know that Calvo has been involved in the organisation of British Paragliding and international events for around 20 years.  Some of the Key members of his team are with us next week (Alan Horsefield and Phil Mackereth).  During the 2000s they made the British Open one of the most popular european paragliding competitions.

Calvo was also a long time rep for the UK at CIVL and the chairman of the CIVL competitions committee for many year.  I was impressed and amazed at how he handled those meetings.  During the Worlds of 2011 in Piedrahita Calvo was our safety director.  He was also team manager for many of the British Team CAT 1 events.

He is now living near San Andre spending his time hunting mountain sheep with his bow and arrow in the nude (I think!) and harvesting freshwater prawns from the lake for his Gamas Pil Pil (bloody orrrible´….sorry).  The french peasantry are also learning a lot about luxury plumbing, getting a fresh turn on some worn anecdotes and being amazed at how much Jack Daniels he can drink without any apparent effect.

If there are any Civl Servant, CIVL or Royal AeroClub types reading this, then see if you can arrange a nice little gong for him.  MBE, OBE, knighthood or  Aeroclub medal.  Go on……it would be really nice.

Here is my design for the T shirt of the Open featuring Calvo. 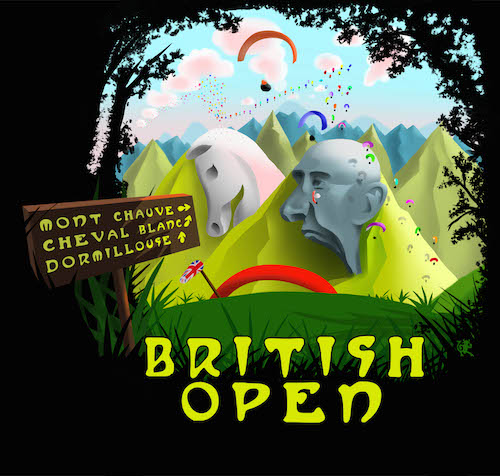