This is the first of a series of illustrations I have done for a new series in XC magazine.  The Series is a comical look at various personalities in the world of flying.   Originally it was going to be a sort of static animation with him barrelling past in a wing suit.  The extreme 5 point perspective with a very tall image would have worked nicely .  That would be something like the sketch at the bottom.  Eventually I went with the PG as it fitted the story better and the smoke trails help to give depth to the scene. 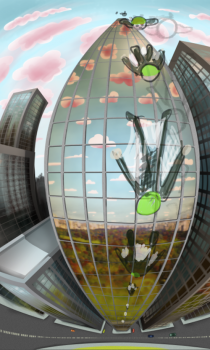 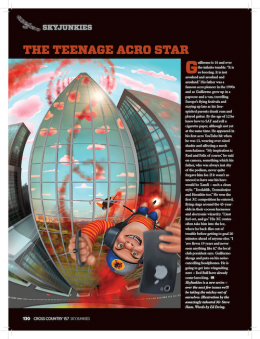 
I spent ages painting the windows and trying to get the scaling acceptable.  Later I learnt some techniques in Illustrator which would have made things a bit swifter.   I made a little intro animation to the series showing morphs between some of the characters.  I thought we were starting the series with the Soul Brother ( A super cool American HG dude), so the animation starts with him before he changes to the Acro Kid (in wing suit mode) before going on to a few of the other characters.  However, things got switched around a bit and the magazine went with the Acro Kid first.

Of course I would rather be in the southern hemisphere flying big XCs.  However, I am not, so I´ll keep playing with my crayons.