At launch last night I was surprised to be congratulated by a pilot from Madrid for getting the spanish open distance record.  Apparently my flight of 246km last week was the farthest flown by a member of the Spanish flying Fed.  Maybe it is the case, but I have not logged a flight anywhere for many years now.  I had it a  few times back in the early nineties when we were all pushing for the first 100km, and with a flight in 1994 of 163km form Lastra,  it was also the biggest flight made in Europe at the time.

It was my personal best up from 244.5km which I did at Peña Negra quite a few years back before the airspace restrictions to 3000m.  The last claimant (Ramon).

This more northerly route avoiding the Madrid airspace was much more relaxing than the more common route towards Segovia, since 4000m days when you need to stay below 3000m are very stressful.

Of course this is not the best distance from la Lastra nor the longest done in Spain.  That still goes to Thomas Puthod with jus rover 300km from Peña Negra. 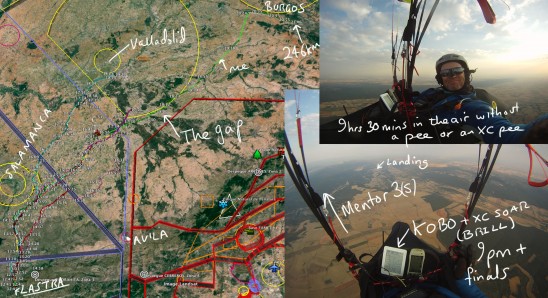 9 hrs plus on a light wind day from Lastra