40th Coupe Icare. My Evolution film made the Official Selection 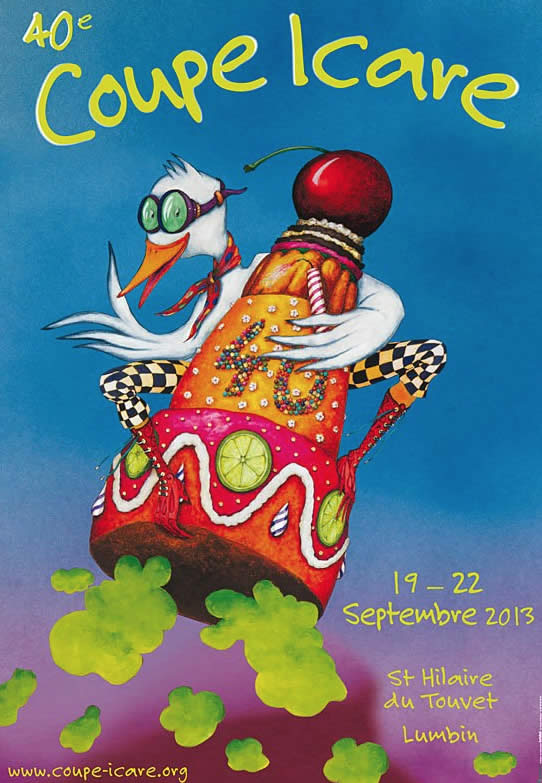 I am very happy to have my film selected for the  Offical Selection at the Coupe Icare which starts this Thursday.

From what I can see there are only two Brits who made the selection.  The other is  Philippe Dalton (who sounds suspiciously French, but lives in Bristol (so maybe a fellow Bristolian), but whose film is also a bit froggy sounding (Sur les Ailes Des Oiseaux).  His stuff is distributed by the BBC and Discovery.  Err, mine is sort of just out there!.

Mine is the very last of the official selection to be shown on Friday night, so if you are there, please give a clap and shout of something suitably Bristolian such as ¨Gert Lush or Wa¨. (//www.coupe-icare.org/GB_projections.html).

I made my film in a frenzy of activity just before the season started for us when I had time to do such things.  I imagine mine is the only film where I did not have to do Acro, infinity tumbles, fly in a wing suit  or do or other such dangerous things.  Lots and lots of hours drawing though, so tough on my arm and neck.

Mine is about the evolution of foot launched flight.  It starts with Darwin´s first sketch, then leads us through the evolution of flying creatures from insects, reptiles, birds and mammals. For humans I started with Elmer of Malmesbury leaping from his tower then quickly through some early pioneers of the 19th Century.

The Key piece is the development of the flex wing hang glider which I show morphing through its various generations from Rogallo´s original Rogallo wing.  If you are interested in HG history you will probably love that bit, but if you are not, then it might not mean too much at all.  The PG evolution is covered quickly including harness morphs.  There is a touch highlighting the latest ¨Shark Nose¨ illustrated by a shark leaping after a flying fish as the last PG morph flies over it.

The final image is of the glider flying off the moving page and over the landscape of Wiltshire (Westbury).  After the credits is a too fast growth of an evolution tree which happens in only about 2 seconds.

I made plenty of mistakes in this animation as the ideas kept coming but were ahead of my understanding of the medium and materials and I ran out of time.  Lots of things I´d like to correct which I now know how to do.  However, even with that I am very proud to have it in the Festival, an event which I have followed and read about for over 30 years.

If you are going I hope you get some nice flying weather and enjoy the festival.

One Response to “40th Coupe Icare. My Evolution film made the Official Selection”