This is an excellent article written by Nigel Page for the Derbyshire Club visit.  Nigel Has been visiting us for over a decade and has had heaps of airtime and distance here.  He is also the Author of 50km or Bust.

This is a quickly written draft of a few points about flying in Piedrahita I think are probably the most useful for Brits coming out to fly with Steve Ham for the first time. If any of it sounds a bit like stuff Steve tells you or if any of the pictures look like the one’s he shows you that’s probably a good thing. If any seems at odds then listen to Steve!

Piedrahita is a fascinating place to fly but there are aspects quite different to the UK or the alps. There is always an element of chance when trying to stay up. The idea is to give ourselves the best odds, roll the dice, and try not to get too upset if we end up on the ground early.

The first thing to remember is that the wind we feel at the Peña Negra take off around mid-day is usually not the geostrophic (meteo) wind. We may feel the geostrophic wind more once we are flying but it may only become apparent after we get some height. At take off we more usually feel the “thermal” wind drawn in by thermals rising from the plateau area and big Gredos mountains further back. Take off is also in a bit of a venturi area on the edge of the hill so the wind is generally lighter once we get some distance from the edge.

The high areas will have been heated strongly during the morning and already producing thermals, but the slope down towards the town will have been heated less because it is tilted away from the morning sun. As the sun gets higher the slopes below take off receive increasing amounts of heat and eventually start to produce thermals. However, thermal activity in the high areas also continues increasing, pulling more air over the edge of the hill increasing the wind at the take off area until (usually) it gets blown out. The result is that there is a limited “window” of opportunity to launch around mid-day while the slope is producing strong enough thermals to stay up, but it is not too windy to take off. Sometimes the thermals over the high ground will make cloud which, because of the angle of the sun, will shade the main slope we are going to fly, inhibit its heating, and make things difficult for us. Nothing is guaranteed!

Steve will try and get you airborne at the time which will give you the best chance to get going and stay up, so be ready to take off soon after he launches. Remember the

wind you feel at take off is not what is going to keep you up. Think thermal! Spines and Cloughs

The Peña Negra take off is at the back of a large bowl which has a number of spines (ridges) running down it with cloughs (gulleys or small valleys) between them. These features can be seen quite well on google earth. Thermals tend to originate on the spines rather than in the cloughs so it’s a good idea to try and stay over the spines. This picture is a sort of section across the spines looking down the slope of the hill.

The down side is that when we get sink on the hill, air falls into the cloughs and runs along them down the hill.

If we are low over a spine or in a clough and encounter sink we are likely to drop down the clough in the sinking air. Not nice!

The best way to avoid this is to keep well above the spines. If we now hit sink we have a good chance of escaping it. I like to keep high enough to be able to do at least one decent 360 without having to worry about the ground. This is also a good height to intercept thermals coming from the spines and enables me to manoeuvre with ease. If we don’t find lift we can fly along the spine towards the valley, perhaps zig zagging a bit to search for thermals triggering from the sides of the spine or adjacent areas, but 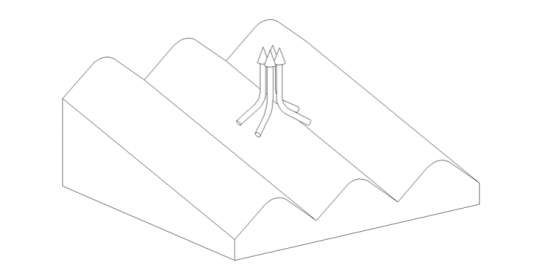 always keeping good clearance above the terrain. If we want to cross to another spine we should try do so quickly, staying high over the cloughs and making sure we arrive over the spine with plenty of height. If we are unlucky and don’t find a thermal over the spines it is a good idea to try and come out over the flat valley bottom before we get really low. This gives us a chance of finding a save from the flats before we have to land.

The area immediately in front of the Peña Negra take off does not normally produce good thermals, so when we launch we have to decide whether we are going to go left to get over the “chalet” spine (Steve will show you where this is) or right to the faces on the other side of the power lines which run up the hill near the take off. If we are lucky there will be an obvious thermal with pilots climbing nearby and we can just go for it. With no other clues, the “chalet” spine usually works best but not always. In particular if there is a significant westerly wind we may have difficulty reaching the chalet spine and going right may work better anyway.

It can be a difficult call. Try and be positive about your decision, but keep looking around while you are crossing to the area you intend to search. If you find yourself against a significant headwind or pilots are sinking in front of you it might be worth turning back to try the other way.

To the right of the big bowl in front of take off is the big spine. This is almost a hill in itself and but it is quite a distance from launch across the potentially sinky bowl. Once we have got some height near take off, particularly if there is a bit of a westerly wind, we might try and get over the big spine. If we have failed to climb near take off we might try and get onto the big spine lower down anyway and sometimes we can just skirt along the edge of the hill to it. A lot of stuff tends to go up over the big spine but finding it is not always easy.

This drawing tries to show some of the types of thermal we may find around the big spine area and other parts of the ridge. 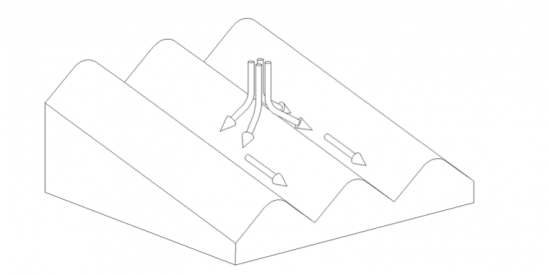 Thermals From The Valley

Thermals from the flat valley are potentially some of the strongest because they can result from a release of hot air which has accumulated over a large area of the valley floor. On flat areas the trigger is often not obvious but the foot of the hill itself may be a trigger for air from the valley. We can sometimes move along the ridge staying quite high by picking up thermals released at the foot of the hill.

Thermals From The Slope

Air heated on a slope cannot accumulate as it can on the flat valley floor. It will slide up and may form a slope thermal running up the hill. If we 360 in a slope thermal we may have to deliberately move back towards the hill a little with each turn in order to keep climbing, the opposite of what we might do in a wind blown thermal where we move upwind a little on each turn. However a slope thermal may also break from the hillside and rise as a column or may “trickle” from the edge at the top. These thermals are usually weaker than those originating from air “cooked” in the valley because the hot air cannot accumulate on the hillside before releasing.

Sometimes if a number of gliders are on different parts of the hill we can see several different types of thermal at once. If we are struggling to climb in a poor slope thermal we should keep our eyes open for pilots or birds climbing strongly nearer the valley indicating a thermal released from the foot of the hill.

Thermals From The “Plateau”

These are potentially very strong for reasons similar to the thermals from the valley. We may find ourselves in a thermal which starts near the edge and creeps downwind over the “plateau”. There is a “but” though. We have to be careful that we can always get an easy glide back to the valley and remember that it can be very windy at the 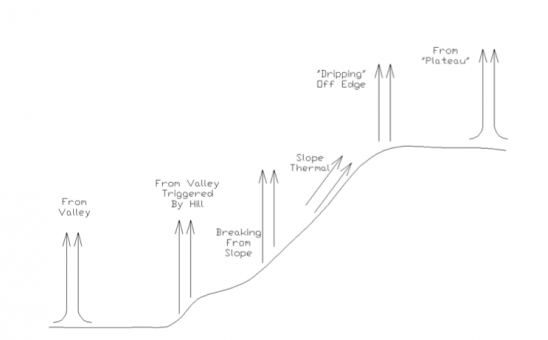 edge. It’s usually not a good idea to take a weak thermal back over the “plateau”. If we cannot get back and clear the edge we will be in for a long hot walk!

Us Brits pride ourselves in how we can hang on in weak thermals and make distance by drifting downwind with them. However, in Piedrahita we more usually want to climb fast and glide. There are times to hang on in a weak thermal, but usually the time spent making those few extra hundred feet on top of a couple of a thousand metres or so is not worth it. If we are climbing very slowly we need to keep a close eye on where we are drifting and make sure it is somewhere we are happy to go!

Some clouds in Piedrahita can be very big and lift can get very strong towards cloudbase. Keeping clear of cloud with the 45 degree rule is a good idea.

Entering the cloud in Piedrahita is not like clipping the edge of the odd cloud in the UK. It can be very scary. If big clouds are about and staying up suddenly seems too easy it’s probably time to run away and land.

The group will seldom manage to stick together and usually distributes itself around the area. If we find ourselves much lower than the leading group or trailing some distance behind we should not try and “race” to catch up which will probably put us on the ground very quickly. We should concentrate on our thermalling and getting height. While we are airborne we are gaining experience and having fun, and once we have gained some height we can follow at a distance if we wish. If we are not happy following at a distance there are far worse ways of spending the afternoon than practicing our thermalling locally and admiring the scenery. The flat areas of the Corneja valley are safe landing even if it gets a bit windy.