I suppose we all try to get as much enjoyment from each flight as possible, but getting 100km, 200km or 300km are important objectives for many of us
who enjoy flying XC on paragliders.

Plenty of flights over 200km have been achieved from Piedrahita’s take off, and even one of 300km. However, since the introduction of the new Madrid Airspace it has become more difficult. From June through to September there are many days which throw up the classic convergence with a southwest wind which can easily take the averagely skilled pilot over 100km and often to 200km.

The effortless dolphin flying, keeping between 3000 to 4000m and staying in the upper level south west tail winds is legal only for your first 65km. After that you need to keep below 10,000ft, which in convergence and with very strong updrafts is both difficult and stressful. Also, as you get into the lower levels the south west tailwind often becomes a quartering headwind from the north or even north east.

Just such a situation happened last year on the 24th of July. For full details you can see the blog entry of that day //www.flypiedrahita.com/blog/?p=2803 . Essentially our group had a great day with 3 PBs and 3 of us at Segovia with around 110km. We managed to stay below the 10.000ft airspace restriction after Avila and found progress beyond Villacastin to be quite slow due to more northerly wind at our flying level so decided to land at Segovia.

On the same day and from the same take off, 2 spanish pilots made 248km (maximized to 261km). Admittedly they were flying Ozone Enzos as opposed to our CEN B and C class gliders, however,the fact that they nearly doubled our distance had little to do with their higher performance gliders, in fact we flew together with them for much of the way to Avila.

What they did was to stay above 10,000ft and thereby keep in the southwest flow. They also stayed in the air for 8 hours! Many similar flights were made over 10 years ago on gliders with far inferior performance to the low level CEN B gliders of today.

The big problem is that it is now illegal. It is surprising to see such an ncriminating flight still hung on the XC contest site! The copy below (click to expand) shows the pilot entering the airspace at around 13.30hrs (area to the right of the red vertical line) then, until near 18.00hrs shows a classic sawtooth pattern of climb and glide almost always above the 10.000ft level (green line of the barograph trace).

So how do we get an easy 100km without having to deal with the airspace!  Easy really.  Just shift the launch point further to the west so that we reach 100km before we reach the airspace. 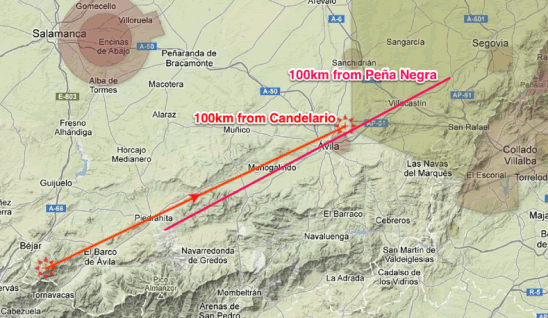 100Km from PN and Canadelario

Luckily we have just such a take off at Candelario which we used almost every day 11 years ago during the windmill crisis when we were prevented from using Peña Negra.  In fact there are two sites in that area, one at the statue of the Virgen near the ski station which we used during the 1992 Sierra Classic International hang gliding competition, and the other the “Plataforma” directly above Candelario.

Both these launch sites take winds from W to NE similar to Peña Negra and also in that the valley breeze makes them flyable most days even with geostrophic back winds.  The launches are at a similar altitude as Peña Negra (1900m), but the  mountains at Candelario continue up to 2400m, which helps a lot on south wind days as they offer good blocking.  We are also negotiating access to the top of the ski station which would give a a fantastic South take off at around 2200m. 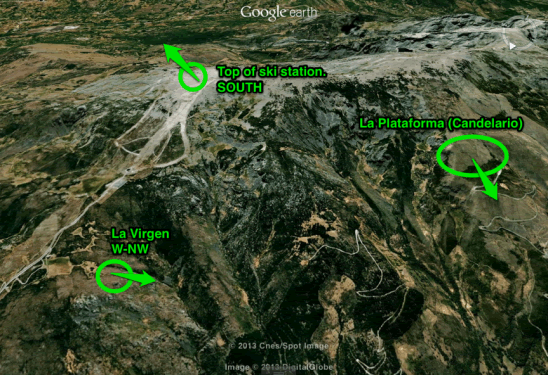 I made 99.8km (a new Spanish record – and a shame about the 200m) from the Virgen launch during the Sierra Classic in 1992 on an Airwave Voodoo 1, which was an high performance glider for its time with a glide angle of around 6 to 1.

That same week I also made my first exploratory flights across the Gredos to the south, though with the poor performance and skills I was consistently decked in the subsidence on the other side.   Improvements in glider performance now make flights to the south much more realistic (such as Tomas Puthod’s 300km and numerous epic flights during the XC Opens events from Peña Negra).

After the 1992 event we did not go back to fly there much as of course we have a fantastic launch directly above home in Piedrahita from where in the 90’s many records were broken.   However, maybe now it is worth the effort of returning if we get an epic forecast with a base significantly over 3000m and a SW airflow just to make sure we bag an “easy”  100km to Avila before the stress of ducking under the airspace to make the 200km mark.

Can we still make 200km and be free of airspace?

Yes we can.   Once again we have to move launch site and go to La Lastra del Cano.   Lastra is perhaps one of the best XC launch sites in Spain and is the launch site of 3 European Records over the last 20 years.  We have run a few PWC tasks there, one of them being the 175km race to goal in 1995 which until recently was the longest task ever achieved in a PG competition (around 50 pilots in goal and numerous FAI National  Distance to Goal records claimed).

There are a few problem with Lastra.  The principal one is that for many years we have been prevented from flying there by La Junta de Castilla y Leon.  This seems to have been relaxed over the last two seasons and we have had some very good flights there recently.  We seem now near to negotiating legal access.  The other problem with Lastra is that as it faces south, the anabatic wind comes on very strong quickly so we need to be there early.

The Map below shows the track from Lastra to make 200km without airspace restrictions and is a common line with good landing and road communications.  It is a similar track as I made in 1993 when I made my European Record of 163km (which was almost an evening flight as I took off round 4pm on loaned oversized Firebird Navajo).

This track we would use when there is quite a bit of south wind and the wind would be over the back at Peña Negra. On the Classic days when we fly from Peña Negra to Segovia or beyond, you could similarly launch early at  Lastra, though by early afternoon the wind may switch to the north, and you would fly the convergence line going more towards Avila/Segovia. 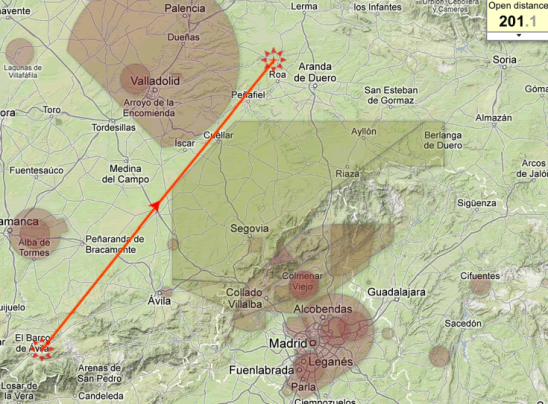 More thoughts on the Candelario/Bejar and Lastra Launches

The landing fields at Candelario are not as good as at Peña Negra. There is a nice landing quite high up that we use which is a little like landing at the Bees area in Piedrahita; near the road and allowing a quick ride back to launch for another attempt.

One possible advantage of using Candelario is that pilots who bomb our en route in the first 40kms will of course be near Piedrahita, and if the conditions allow may get a 2nd opportunity from Peña Negra.

We would mainly be using the Canelario sites when the forecast thermals are above 3000m. With predicted thermal tops below this we may just as well use the Piedrahita site.

We would never bother with Candelario for evening flying. The Piedrahita range is much better for those restitution flights and we are also landing back at home.

Many of our regular clients who have been coming out for many years have perhaps not made the 100km mark. Perhaps there are various reasons why a 100km is not made as often as it might be:

One of those was the problem we had in keeping track of our pilots for the retrieve. This limited ranging too far from the major roads With our live tracking system this is now less of an issue and 2012 gave us more 100km flights.

Another issue has always been in trying to maximize flying amongst the whole group. This would often mean curtailing the flight of a few to enable the whole group to re-fly in the evening. In 2013 we hope to be running 2 vans during the peak months (if client numbers permit). This should allow us more flexibility to follow pilots till sundown whilst getting most of the others back for an evening soar.

Many potentially long flights end at Avila due to the encroaching north wind or simply because of the maneuvers to fly further north into the Notam area. By simply shifting our launch 40km to the west we need neither fight the headwinds nor duck under airspace to get our 100km….and also it is a shorter retrieve at the end of the day.