The best paragliding headset to date

Steve Uzi came over this year with one of Simon Murphy’s Zoot headsets which he was reviewing for Skywings. Steve is professionally involved in TV and sound stuff and thought a lot of the qualities of the headset. It has excellent robust screw in connector jacks, is well thought out, has a good mount for open faced helmets, a good quality foam sock over the mic, a top quality rugged PTT button and most importantly of all works extremely well. Also, unlike so many headsets sold to unsuspecting pilots, is nearly half the price of the competition. I ordered one right away from Simon.
Simon Murphy seems to be one of those constants in British PG and HG. If you look at some of the 1970s Skywings stored in my house you will see Simon advertising back at the dawn of the UK flying hang gliding history. It seems that it needed somebody like Simon to get fed up with all the other dross and produce something that works fantastically and is not the usual piece of rubbish that fails after a few flights. I have various boxes of different brands of headset that I purchased and have failed on me over the last 20 years. Some were good and lasted a season or two, but were very pricey (the Eggler headset from Switzerland and the Ultimate headset from the US were probably the best). One I had, the Vixen, was so rubbish I did not even use it long enough to break it as it just did not work without yelling into at the top of my voice.
My discovery of the Zoot headset arrived toward the end of the season. I had been using a Sandpiper set which I bought earlier in the year and had yet to break, but whose reliability was becoming questionable. The Zoot has been a joy in that I can use a conversational level of chat and I come across loud and clear. The volume aspect had been the biggest problem I had over the years.
Most of you who have been flying in groups with radios will have had a day ruined by somebody blocking the frequency due to a defective headset. With our live tracking it is now not so important if a radio goes down for the retrieve aspect, but frequency blocking by a duff radio setup makes the safety advantage of carrying a radio zero, as well as being a pain in the ear.
If you are looking for a new headset at the moment then this is the one to buy. I have not tried the closed face version, but that is normally less problematic than an open face set up so it is likely to be equally better than the rest of them.
I use an ICOM V 85 since it allows me to knock out 7Watts if I need it. The headset works perfectly with that radio. For those with the cheap teeny weeny Chinese radios which are now getting popular, then you may need to check the connector options 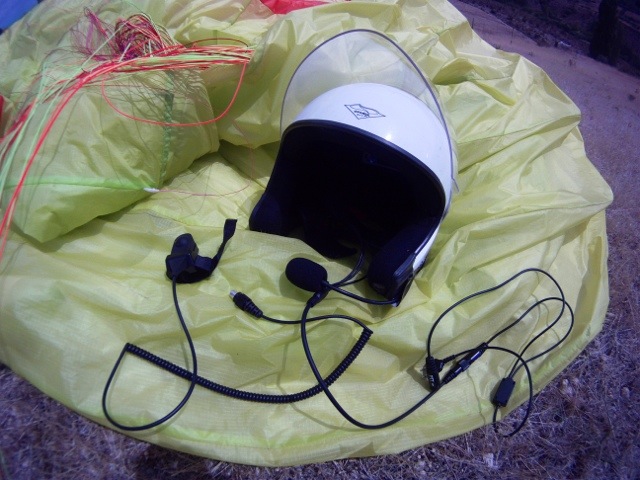 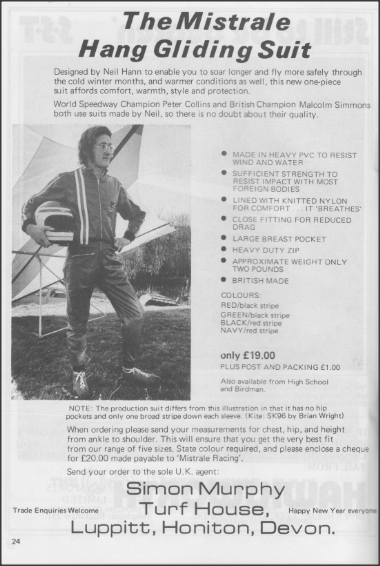 I imagine Simon Murphy is Skywings´ (Wings´s) longest advertiser.  Here he is in all his sideburned splendor  in 1977.  Of course not many people had telephones back in the 1970s so you will have to see a later Skywings for a phone number.  The Turfhouse address is still the same and you can even use the new fangled electronic mail which is  simon@turfhouse.com

One Response to “The best paragliding headset to date”