As we pulled up at take-off today Andreas arrived and plonked in my hand the recently released Arcus 7.  I have always liked the Arcus – in some of its incarnations  of 1 to 7 the most sold glider ever (so Bruce G told me).  Anyway, off with the Mentor2 and on with the Arcus (80 -105kg with me around 93kgs).  our forecast was reasoably epic, but with some risk of Cbs.

I had around five and a half hours and around 112km to give it a good go.  Full specs and propaganda can be found at the swing website – here you just get my opinion and gut feeling.

The first thing you notice is the massive pitch damping, which is actually very nice.  Sometimes flying here can be like having a pair of excitable dogs on a lead with constant reigning back as you enter climbs.  The Arcus tells you its comming with a little speed up and a dip then cuts straight into the climb.  Nothing wrong with that at all.  Maybe in superlight conditions this may loose sensitivity and make you miss a nearby climb.  However, when small nuclear devices are being released all around you, then this is a very nice wing to be under.  The roll control is nice and progressive and it is easy to put the glider where you want and to hold the bank angle you wish.

I flew the Swing CENC recently and took a while to be confortable.  This wing felt like an old friend immediately.  In fact I have not flown a mono wing with 4 riser sets for some years, so maybe that was part of it.

I flew with Enzos, Mentors, Deltas, and B GTOs for a fair time.  Yes it may go a little worse, but it did not significanty penalise me in any way. I was using the speedbar a fair amount and the sink penalty was not to bad for its level, but the speed gained was not so much either ( I was pully to pully quite happily in rough air).

At around the 3.5 hr mark, thinking the glider infallible it was reminded that it is only a bit of soft cloth up there with a 90%aysmetric near the windmills in a rough climb.  This is the biggest collapse I have taken in years, so maybe that damping does reduce a little ones reactions.

Anyway, a sexy looking glider (more so than the Mentor 2 with all that sweep back), plenty of performance and a very easy ride.  Andreas left before we made it home so the glider is here for a while if anyone wants to demo it. 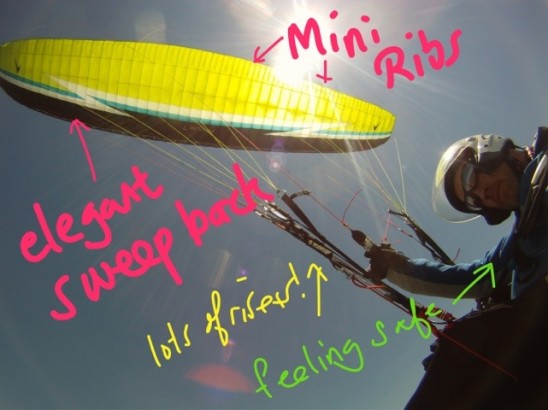