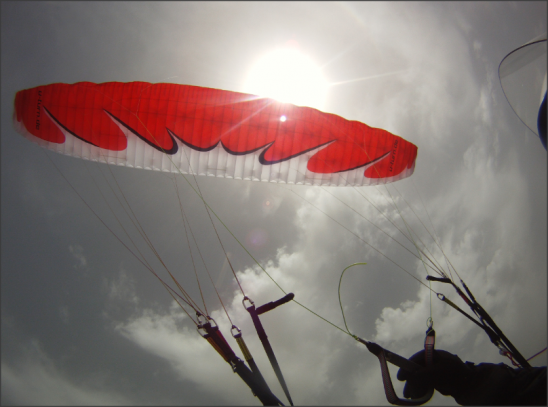 Today was a good test day: a mixture of very gentle thermals, then later strong climbs with a decent dose of turbulence.  I flew the SM, so was a little light, maybe around 90kgs (top end 100kg).

The glider looks very nice and has all he bells and whistles you would expect from a newly released glider boasting a glide of 10+ (lots of strimmer wire, and fancy names like HPD, HPCD – you can check U turns for more info).   I was not able to make any decent glide comparasons as the only glide with others (a Mentor 2 (Andy) and Delta (Ian)) we were rushing downwind in huge generalised lift and hoping for a nice sink hole.

What I can say is that the glider coordinates/handles very nicely and communicates well the air around you but without giving you an overload of movement.  I felt at home immediately and as with  all good gliders , though normally more found on higher rated wings, the wing gave me that sense that I could anticipate and feel the air beyond the glider.

I would certainly put this glider at the top of my wish list if I were in the market for a new wing.  I have not been so impressed by a CEN B since the Mentor 2.

One Response to “U Turn Black light – first impressions”