A heat low which has formed in Southern Spain bringing a little more instability in medium and upper levels.  Increasing temperatures (28ºC Piedrahita) with decent thermal climbs.  The diagram shows the thermal index along the track Plasencia/Segovia.  Probably best XC direction would be towards Guijuelo to the NW.  Light SE so we expect P.Negra to work with N-NE winds low down in the Piedrahita valley.  Thermal tops between 2600, maybe rising above 3000m later in the day.

Wind at Peña Negra at 9am SE around 5-10km/hr.  We will go up the hill around midday.

Well, Brian had another epic with some climbs to near 4000m.  He made a run down to the big mountains at Tornavacas and made a leg finishing to the NW of Piedrahita. During the return leg he had to keep low to avoid overdeveloping cumulus clouds which later in the day turned into Cunims. 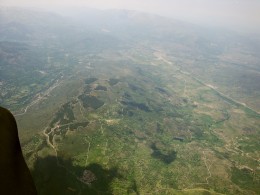 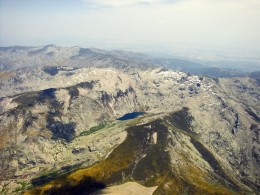 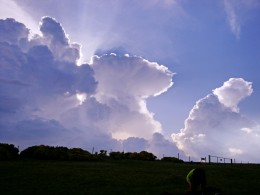 We tried an evening flight at Chia with the backdrop of a cunim in the Corneja Valley, but the wind was very light and across the take-off.