From the 20th to the 27th of October we had a very special group. We decided to call it the “Spanish Experience” and it is the result of Pat Rowley´s efforts to bring her Spanish language class over to Piedrahita. Our goals were to improve their speaking abilities, and their understanding of both the language and Spanish culture.
Most of the brave participants came from Malvern, except Jean, who was Scottish, and all of them were over 60, which made their enthusiasm about learning Spanish even more remarkable.
For the duration of their stay we enjoyed some beautiful weather, and we were able to get out and about as a complement to our morning lessons. Here is a brief summary of all the interesting things we did that week.

1st day. Thursday
The Bristol flight was much delayed the day before and we had arrived well after midnight, so the first day we had an easy morning. They all received their reading material for the week and we started introducing ourselves and practising some basic social skills in Spanish.
I learnt that Sylvia was the eldest of the group, but at 84 was incredibly fit for her age, Liz and Neville were experts at harnessing goats, Liz was a serious chocolate lover and Neville enjoyed campanology. Gillian was another surprise as she too was incredibly youthful for her age. She had been a primary school teacher, and was eager to improve her skills. Mary, leader of the group and their inspiring Spanish teacher, was a keen knitter. Jean, with her lovely Scottish accent, had been a biochemistry researcher, and Pat…well I didn’t learn anything new about Pat, having been a best friend and soul mate for many years.
After that we went to the main square for some “tapas”. Unfortunately, it looked like the bars had chosen that same week for their holidays and most of them were closed. We struggled to find one open but we finally succeeded.
In the afternoon we visited Barco de Avila and walked to the abandoned village of Las Solanillas to travel back in time visiting derelict ancient cottages. I cooked dinner at home for everybody and we retired early to bed. 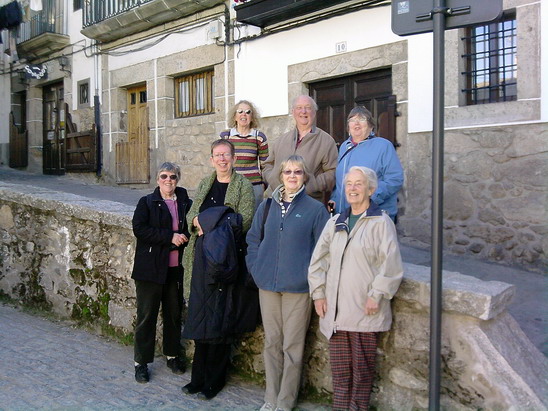 2º day. Friday
The theme for day number 2 was Spanish history. We started reading a text on the subject that condensed more than 2 millenniums of history into 2 sheets of paper. For the second part of the class, some people had written something about an event they thought was relevant, and so we learnt a bit more about the battle of Trafalgar, the 23F and the Dundee troops in the Spanish Civil war.
In the afternoon we drove to Salamanca, where we visited some of the most representative buildings; the main square and the University. We had a nice three course lunch in the “Corrillo” restaurant, and after that some of us went walking while Neville and Liz took the tourist train. At the end of the day we were exhausted after all the reading, walking and eating.

3rd day. Saturday
Day 3 was dedicated to Spanish nature. Each of the 14 national parks distributed all around the country is a sample of a particular ecosystem, so we read a bit about each one of them to have a general idea about Spanish wildlife. Many people in the group had been to the Canary Islands and knew some of the amazing landscapes that can be found there. After a tea break we all spoke about our favourite animal, cats being the most popular.
We drove to the Gredos regional park to have our picnic lunch next to the Tormes river. The weather was very pleasant and we went for a walk up in “La Plataforma” to look for wild goats. We saw quite a few females and youngsters but no big males, and while we were busy looking at them Sylvia and Jean started their way up the hill, thinking the “Laguna Grande” was just round the corner. In a couple of minutes they had disappeared up the hill and it took a mighty run up the slope to catch them up (don´t forget Sylvia is 84) to let them know that a 4 hour trek wasn’t quite part of the plan.
On the way back we had a quick look at the Visitor’s centre and we also stopped at the newly restored water mill in Navacepedilla de Corneja to scrump some “Membrillos”.
Barbeque at home with plenty of meat and some home made quince jelly from the stolen quinces. 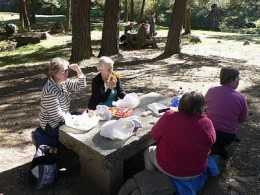 4th day Sunday
The treasure hunt looked like a bit of a challenge as we were all rather tired after two busy days. Liz stayed at home, as she thought she wouldn’t be able to do all the walking. It turned out to be a very interesting activity indeed, probably one of the most popular of the week. The task was to find a number of Goya paintings, hidden in several places around Piedrahita, and to do that the group had to interpret the clues hidden in the short rhymes (in Spanish of course) that would be found with each painting. My son Oliver came with us and helped them with his local knowledge. In the end they found all the clues and everyone got their little treasure: the typical “botón charro” a small silver brooch.
We had an easy afternoon resting at home. In the evening we watched a Spanish film: “Camino”, by Javier Fresser, which is much acclaimed, but it was a bit too intense and the dialogue difficult to follow.

5th day Monday
It started with a brief summary of some of the Fiestas and folklore across Spain, from the running of the bulls in Pamplona to the Ku Klux Klan style Easter processions. Then everybody had the chance to explain a British tradition, such as Scottish Hogmanay, May Day or the art of Campanology. 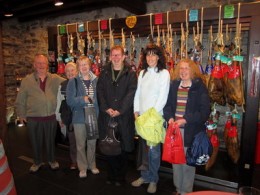 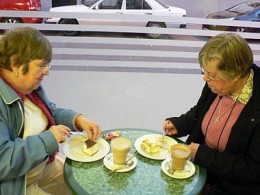 It was a long day out which started with a visit to a local pottery, followed by a trip to the scenic village of Candelario in the Sierra de Béjar. We walked up its picturesque streets and had lunch in a small and cosy square. We then drove to Guijuelo, ham capital of Spain, where we visited the local museum and learnt about pigs, their slaughtering and the ham industry. We had booked a ham tasting in an old cellar turned into delicatessen store, which was served very professionally by a young woman. They offered us a delicious combination of ham and cold cuts served with an excellent wine. As you can see in the picture we all look rather contented at the end of the session, except…. the two people that escaped the photo session to top up with cakes.

6th day Tuesday
Last day and more food on the menu. For the class there was a quick review of Spanish cuisine followed by personal experiences: Gillian likes the Canarian “Papas arrugás” (small potatoes that you dip in sauce), and Pat doesn’t enjoy pigs ears or tripe. Mary wrote a beautiful account on how to make quince jelly and Jean told us about “Técula Mécula” a sickly sweet dessert from Extremadura. By the way, here is the Spanish omelette recipe for you Sylvia:
INGREDIENTS:
4 medium-sized potatoes, peeled and thinly sliced, 6 eggs, 1 chopped onion, ¼ litre olive oil (or even more), salt
RECIPE:
Heat the oil in a large frying pan and then gently fry the sliced potatoes and onion in lots of oil until almost soft, stirring from time to time so that they don’t burn on the bottom of the pan. Don’t cover it with a lid. Beat the eggs in a bowl and season with salt and pepper. Add the potatoes, etc. previously drained from any excess oil, and mix well in the same bowl. Check seasoning. Heat a little oil in a non sticking frying pan on a moderate heat. Pour in the mixture. Shake the frying pan from time to time so that it doesn’t stick to the bottom. Turn the heat to low and let the omelette set on one side (usually 5 minutes is enough), then turn it by placing either a flat plate or saucepan lid on the frying pan and quickly turning over. Gently slide the omelette back into the frying pan and continue frying, until it has set all the way through.

As it was market day we all went to the main square to do some shopping. We bought all the ingredients to make Paella, visiting also the local butcher and fish shop.
In the afternoon we visited the Ethnographic museum of San Miguel de Corneja guided by the mayoress, who after the visit took us for a walk around the village, including the town hall. She gave us each a badge with the local coat of arms, and then we were invited to her own house for tea and biscuits. Two more hours and she would have declared us all favourite daughters (and son) of the village.
A big paella was cooked by all in the evening, accompanied by a salad made by Pat littered with deadly hot peppers. 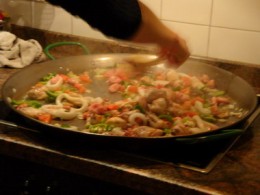 7th day Wednesday
The plan was to spend the day in Avila on the way to the airport, but since Jean had to wait for everybody else on the arrival day, it was decided that, as she had an earlier flight again, we would go to Madrid early, leave her at the airport and spend the rest of the day in the city sightseeing. We still had time to drive around the wall of Avila on the way there. In Madrid, we took the Metro and went to the centre, where we had a 3 course meal in a traditional restaurant followed by a stroll to the main square. We also visited the “Puerta del Sol” and “Plaza de Colón”. It was rather hot for November and we were all tired. It had been an intense week and a very fulfilling one. I said good bye with tears in my eyes and drove back with Pat, who was to stay for another week. The rest still had to suffer another long delay before reaching home.

Thanks everybody for a fantastic week. Keep up all the good work and enthusiasm and I hope to meet you again sometime for more Spanish experiences.