PB for Colin and high excitement and PB for Martin.

A great forecast (to 4000m+) with 15-20km/hr of wind from the NNW. Breezy early at launch with climbs to around 3300m on the big spine. A few bomb outs near the Cemetery at Casas del Puerto, with Colin, Martin, Nigel and myself over the pass some going to 3500m. A fair bit of N on the other side. Colin masterfully took a good line landing on the outskirts of Avila. Myself Brian and Nigel had a harder time wth the N wind. Martin, some 50km out but to the South and in the hills found himself an interesting bit of turbulence near landing which caused him to throw his reserve. A nasty cut to the elbow was the only consequence for the hardy X-marine and helicopter pilot.
Nice evening conditons once again. 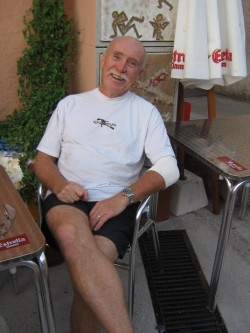