Yet another great day with various PBs. Nick, finally got over the pass after a number of years trying. Colin equalled his PB from last week with a landing in the same field some 10km back from Avila. Håkon, improved on yesterdays PB (Avila and back to Amavida), with a straight line flight of 83km, his Brother Pål landing some 8km short of Avila. Only Mike, yesterdays superstar, failed to get over the pass after being drilled in sink to land at the Cementary at Casas del Puerto.
I test flew the new Kangaroo 3 tandem today with Tom as passenger. With an aspect ratio of 6.2 and 61 cells and a promised glide ratio of 9.5 it really did look the business. We landed with Haakon after 4 hours in the air, which was a great test flight. Much more direct and easy handling than my BiGolden without the adverse yaw/brake tendency. It seemed to glide very well, though perhaps not as fast as my Golden. However, if I could swap, it would be bye bye trusty Golden. 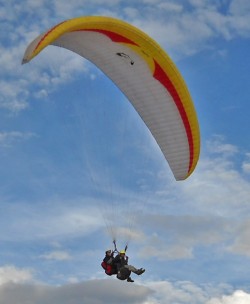 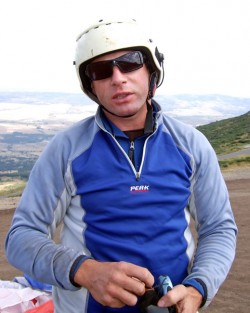 Even though we only got back to Piedrahita after 8-30pm we still made it to the top for some evening flying. Distinct conditions from other evenings, with the wind straight on, loads of lift, but around 25km of wind comming in even at sunset. Good conditions set to continue, but with some increase in cloud depth an dropping base.