Another fast race to Avila with 70+ in goal

A lighter WSW wind but with an inversion at 2600m. To not make the same mistake as yesterday we decided on a simple race to Goal with some pre Start Point manouvering along the ridge (corral, then to Santiago de Collado for the start). Smooth climbs and a fast run for the winner with around 1.30 minutes for the 60km race section.
Near goal a Japanese pilot threw his reserve at the end of speed section (pushing the bar too hard!). He came down ontop of some HT electricity lines, luckily for him they were the only ones on the West side of Avila which are not live. The firebrigade came to help get it down, one of them being Julio, our local HG pilot.
He was the same pilot who threw his reserve 2 days ago. He has decide retire from the rest of the comp now. 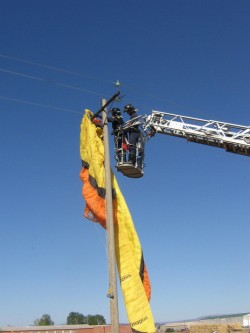