Last year extensive improvements were made to the launch area.  Much earth was brought in and the gradient made steeper.  In the orgional plan it was to be turfed, but we were told that the budget had been spend.   Now finally the topsoil is going on, though I think a little late in the season as it will be getting very dry from now on.  However, it will serve to cover the rocks exposed during the weathering over the winter.  At the moment we still the machines leveling and bringing earth in.  Nigel in the photo has found a nicely compressed bit of topsoil. 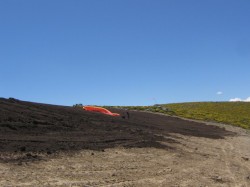