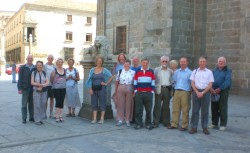 A group of long distance walkers from the Doncaster-York area visited us last week and for the event we enjoyed the warmest and nicest weather we have had this year so far. Not unlike July conditions, with cumulus everywhere and very high cloud bases, it was slightly too hot for walking.

It has been a remarkable experience for us. 15 experienced walkers, all incredibly fit for their ages (which ranged from 40 to 76) invaded our lives for a week. Their leader, Terry Griffiths, organises holidays abroad as a hobby, and he chose us to provide him with the logistics for their first visit to the Gredos area, for which we feel very honoured. It turned out to be a fantastic group: “a drinking group with a walking problem” in their own words. They were all very cheerful and friendly and really good fun, which provided us with an unforgettable week full of anecdotes.

In total they walked a staggering 97 miles in 6 days. Each day I would propose a route and Terry would adapt it to suit the demands and skills of his group.

The first day, a bit stormy, we visited Salamanca, with a guided walk around the battle of Salamanca site early in the morning followed by a long stroll around the city visiting the most renowned monuments and a very civilised lunch in a restaurant.

On day 2, they walked up to Peña Negra and then along the hill on the top plateau, following the “Balcón the Gredos” route, which provides the best views of the main Gredos massiff as well as the Barco and Béjar ranges. 22Km and 1000m ascent, a bit too short for their liking.

On day 3, they walked one of the classic gorges of the Gredos peaks, the “Garganta de Bohoyo”. It was the original route used by the locals to go into the heart of the mountains. An out and return, it was chosen on the account of being the most likely one to have snow only towards the end of the track. However, it wasn´t snow they found but a raging stream across the track cutting the advance. A very wet winter has left these mountains with a deep layer of snow, which is now beginning to thaw, making the tracks a bit treacherous as the water comes down in torrents anywhere it pleases. In fact after the 4th day the holiday was renamed X-tream walking.

Day 4 was Garry´s birthday, and there was a general request for a route in the Jerte Valley (where the cherry trees were in blossom) with a pub at lunch time to celebrate, so they walked 27Km from Umbrias to Cabezuela del Valle across the Tornavacas pass and mostly downhill. They found a dog at the beginning of the route who decided they were an interesting bunch and followed them all the way. It had to be driven home on our way back 8 hours later.

On day 5 we stayed in the Piedrahita valley, and walked a 30Km round trip in the Sierra de Villafranca. They went up to the big round corral at the end of the ridge and back along the foothills from Villafranca village. The classic out and return Corral´s run but on foot rather than flying.

Day 6 was an eventful day. I had planned a linear walk along the GR10 in the Tormes valley, 26Km visiting spots as emblematic as the Pozo de las paredes (the swimming hole), Puente del Duque and Las Chorreras, and finishing in the Gredos Parador, the hotel which used to be the King’s hunting lodge. Meanwhile two other members of the party decided to go for a more challenging walk into the mountains. They got into trouble when they found a fast stream crossing their path, and they were delayed more than 2 hours while the rest of the team was waiting for them. To that we added a bit of a mess with the retrieve vehicles, misplaced mobile phones, tandem flights that didn’t happen and Terry being abandoned on top of Peña Negra on his birthday. All was forgotten later on in front of a big paella with a fiery “queimada” to celebrate the end of the week and Terry´s 69th birthday.

I would like to thank everybody for all the support, patience and smiley faces. I would love to see you all again sometime. I had a fantastic time, but I have a confession to make: you really tired me out!

One Response to “Long Distance Walkers week – by Puri”