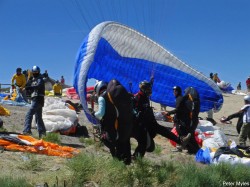 Once again epic conditions with climbs over 3500m.  We set a valley task within the Corneja valley progressively zigzagging out towards the flats as the afternoon wore on.  The last turnpoint was some 12km out to the NW of the Piedrahita goal and many pilots struggled into the headwind there.   50 in goal with the fastest time around 3 hours.  First in was Borja Rodriguez, Spanish champion a number of times in the past.  Wilfred came in third and will have consolidated his overall lead.  Wilfred was also at our British event and has now flown (having reached goal in every task of the Brits as well) well over 1000km in the last 11 days.

Tomorrow is looking good, though I will have to set a short task as it is the last day.  Looks like we will have 7 days out of 7.  Something of a record for the Spanish Nationals.