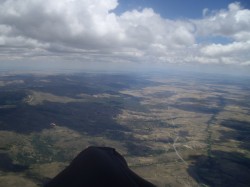 After two non flying days, a great day today with the classic convergence setting up and allowing a fast goal flight.  The route was further north after Avila to avoid the airspace, with a random town I chose some days ago to give us more options for task setting within the Notamed glider area.  Unfortunately google earth did not show if there was any bar at the town, so those of us getting to goal (26 pilots), had a thirsty wait.

The day looked like it may have turned to Cbs , especially along the convergence line in the valley of Ambles.  In fact a few of the safety committee called level three (including me), though after a few pulses with congestus clouds looking like they would develop into full Cbs, things calmed down.  I for one did very little circling, just pushing on, quite happy to be low and away form the big Cus.  Those who also followed this safer option found themselves low in the northerly near Avila, only the higher levels had a following Westerly taking them towards goal.  One less cautious Dutch pilot took a climb of around 1000m into cloud.

First into goal was Cecilio Valenzuela, followed closely by Mark Hayman.  I rolled into goal as one of the last on my demo Artic 2. 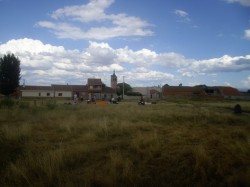