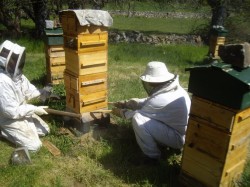 I tried this method as an alternative to Warre´s method of artificial swarming for the case when:

1) The top box may not have viable eggs

2) Through the windows I can see obvious signs of queen cell construction in the 2nd box.

The Warre method of driving the bees down and leaving the top box on the original site would be a problem as a new queen could be produced. The old queen and the new potential queens would have been taken away to a new site, leaving only foragers returning to the old site with a box of comb and honey.

The method described takes the majority of the colony to the new site with the old queen and little comb. On the old site top two boxes remain with brood, stores and possibly the queen cells. It is populated by some nurse bees who refuse to be driving and by foragers returning to the original site.

With the use of the lift is very easy, with a minimum of flying bees and the bees easily driven upwards and contained within the hive.

I started from a populous Warre hive with three boxes. The top box full of honey reserves, the middle box with brood and sign of queen cells, and the bottom box with some comb initiated on the top bars.

1st roof and quilt is removed and the top two boxes are raised by the lift.

2nd the bottom box is removed

3rd, the lift is dropped, and an empty box is placed on top of the stack, and on that the previously removed bottom box with bees and a small amount of comb is now placed on the very top. 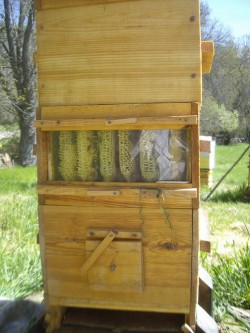 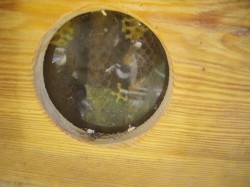 5th. the bottom two boxes of the stack (the original top two with reserves and brood) are left at the site and the upper boxes removed to a new stand, using a mesh on the bottom and top during the transport to stop bees falling or flying out.

6th mosquiteros, quilts and roofs are used to cover both hives.

By the following day there was a regular flow of pollen to both hives. Some feed was given to the colony with the old site as they had no stores, although with the current level of foraging conditions, it would probably have been unnecessary. 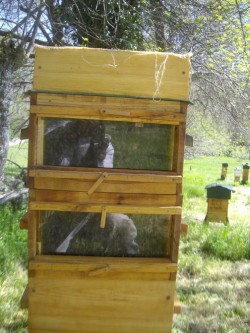 3 Responses to “Driving bees to make an artificial swarm.”