Traditional construction methods in the Gredos mountain area of Avila. 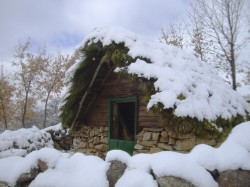 What I like most about the old mountain villages of Gredos is the way the were made from local materials which were used in simple structures with elegant solutions to common construction problems. Some of these methods unchanged since the time of the Vettons before the Roman invasion. The buildings fit in with the local landscape in sharp contrast to some of the buildings thrown up alongside them in the last 40 years with modern materials and less labour intensive methods.

Many of the simple houses and barns we can see in the area are over 500 years old and conform to a pattern which was effective for the needs of their rural lifestyle in an area of climatic extremes: Long cold winters and hot dry summers.

La Herguijuela, some 6km behind take off has a good collection of the classic Gredos houses. The typical Gredos house is made of granite stones, often un-worked and used without mortar. The living area is on the ground floor, and a loft above used for storage. The house is lined up with the mid day sun, with the only entrance through this side and within an enclosed corral. The doorway is generally covered by an extension of the roof, this area normally having a granite slab seat, a Poyo, used for sitting outside and doing the usual domestic work (plucking chickens, shelling peas, mending etc). Going though the door you enter the Mediocasa, often the only room with natural light (through a solitary small window near the door). The doors would generally be divided in two, the top half generally left open for light and ventilation in the summer, with the bottom shut to keep livestock out of the house. From the Mediocasa there would be the Alcobas(sleeping niches), which would be closed with curtains.

At the back of the house would be the kitchen. The wide chimney flue takes up most of the roof of the kitchen. These flues would not generate much upward draught so the smoke would linger about the room. This was considered a benefit, keeping down insect, curing hanging foodstuffs and preserving the wooden beams of the house. This smokey area would be the only warm part of the house in winter. Alongside the length of the house would be a covered stable for livestock, which often had a opening on the north side to throw in foodstuffs. These houses would often be aligned with others sharing the main structural wall.

Most of the roofs are now covered in tile. However, there are still a number in La Herguijuela which have a thatched roof of mountain broom. Of course the mountain broom is everywhere to be seen in Gredos, and farmers have traditionally made great efforts in removing it to increase the pasture. In the remote mountain villages of Gredos it is likely that all roofs were thatched with broom before communications in the last 200 years improved allowing the transport in of tile. There are still a number of buildings in La Herguijuela with thatched broom roofs. Throughout the region and in the Sierra de Francia there are shepherd huts in remote parts made with dry stone walls and roofs of rough timber and broom.

I have no experience of building, only an interest in how things are done. What I proposed to do was to make a building using the same techniques which have been used here for at least 2500 years, without the use of cement and using only the materials I could gather locally: Granite, timber and broom. The buildings final purpose was to be a Chicken house, but I wanted to make it to a scale seen in typical chozas found in the Gredos Mountains.

First I made many observations of buildings in the area to see if I could work out the structural methods used to keep them up and hold them together. Building walls without any form of mortar is a technique as old as civilisation, yet I did not know how it was done. I had a theory, and by looking at the remnants of fallen buildings and walls decided it was done by building two walls, leaning in against each other, with the middle filled with smaller stones and some stones bridging both sides to tie them together. Checking the internet confirmed the theory and gave me a little more info and confidence. Many of the Chozas found in Gredos are round. The reason for this is that corners are problematic with dry stone walls. Extra long stones are needed at the corners to tie things together. Finding the right stones near the construction can be difficult. A round building avoids this problems, but at the time of starting the building I could not work out how the forces of the timber of the roof would not push the walls outwards and over. I had some theories and ideas on how to do this with a square or oblong building (using a heavy timber frame resting on the dry stone walls to take the outward forces of the roof spars), so dug my foundations trench as oblong, hoping I would find some decent stones for the corners. 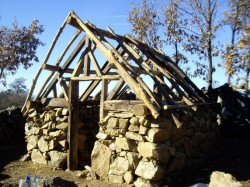 With the walls at about 1.5m high, there is approximately 1 tonne per metre. This was going to be a lot of stone and work, so I did not want it to be too big. Also, there was the possibility that my abilities would not allow me to make it (or I would be bored and abandon the project). However, since the walls needed to be at least 85cm thick at the base, the structure would have a decent width, otherwise would just be a pile of stone with a crevice in the middle.

My source of granite stones was from the pile of earth and stone excavated from our house foundations. Plenty of large stones were visible, and plenty more could be dug out from the pile. To move the larger stones and other hinds on construction without modern machinery I checked out internet pages on how the ancients build pyramids/Stonehenge etc. I made up a sort of skid/sleigh to drag the bigger stones and made rudimentary ramps to ¨walk¨ the stones to the higher courses.

The key to laying a dry stone wall is to place the stones with their longer length inwards. There is a temptation to use the flatter sides for the exterior face of the wall, but these almost always lie along the longer sides in naturally occurring granite stones. To have a smooth outer face considerable carving of the granite would need to be done on the ends (or you could use cement, and it would be easy). It was quite satisfying to assemble the rocks, placing each one like a jigsaw puzzle. My estimation of the ancient Egyptians and Incas with their flawless joins and smooth surfaces was much higher after admiring my knobbly wobbly wall. However, as an imitation of a 16 century local building, I think it would just about pass. 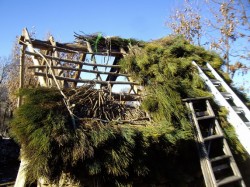 To tie in the stones I laid some heavy wooden beams along the tops, with overlapping notches. These beams I sourced from the local landfill. Some were heavily waterlogged and took a huge effort to move and place. However, from the remnants of old houses, some of the beams probably 100s of years old, I would get my authenticity (and recycling and being cheap!).

My roof structure grew based on the forms I had seen in barns and broken down exposed houses around the area. I was still unsure of how to thatch the roof, and much of the stuff on the internet made things more confusing. However, the Thatcher’s craft (//www.countryside.gov.uk/LAR/archive/publications/thatchers_craft.asp) was a great help. However, these techniques were for long straw or wheat reed. Although I found a page of thatching with broom in Asturias/Spain, they showed the crown of the roof construction to be quite different to this area (//thatch.org/spain.htm) Also, when looking (with the unexperienced eye – from a Thatcher’s viewpoint) at the remaining roofs I could observe it was difficult to understand how it was actually applied and kept on. 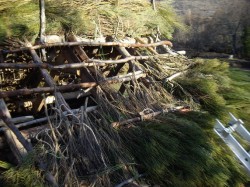 Anyway, after plenty of trips to the local landfills and the occasional downed tree which I came across, I managed to erect the framework of the roof ready for the covering of the broom thatch.

My idea was to use exclusively the broom from the take off which is always in need of clearing. However, the take off was covered in snow, and it took five days of work and 5 vans full of broom to get enough. I soon found that it was excellent material to work with. I used the method of using sways, occasionally backing up with stitching. For the roof crown I laid deep tied rows of broom along the top beam. I was then able to thrust the broom into this tight mass (leaf outwards) to make a good finish without the exterior timber shown on the houses thatched in Asturias. 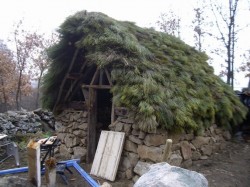 Either end of the roof, between the wooden supports I had planned to use adobe (mud) bricks which I have seen used to nice effect in the Sierra de Francia. However, I decided it would be a lot easier (less time finding and dragging bricks from the landfill) to use overlapping timber cladding, which is also a common way of cladding barns here.

Because the purpose of the building is to house chickens I wanted some small doors at the back behind the nesting boxes to remove eggs and also some windows to improve their laying in wintertime.

I salvaged from the landfill a classic Gredos Portalon, leastwise half of one. I have yet to make the upper part of the door, but the house is now nearing completion. We have had weeks of bad weather and heavy snow, so I will have to wait a while to make the finishing touches.

The outer walls are called an Ameil, which was historically used for holding the hay after harvest. I shall gate it to make a bit of a pen, though of course any grown chicken will easily jump over it. The chickens shall be fully free range, though we are a bit worried about foxes, as there is a fox run through the lower part of the field, and when crossing, do not seem to worried about our presence.

Getting the hens depends upon also living in our new house. The snow has also held its construction up, so our hopes of being there by May are gone.

3 Responses to “Traditional construction methods in the Gredos mountain area of Avila.”