The last day this week and 2008 season. Very nice thank you. 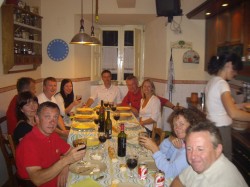 Gentle thermic conditions with very light northerly winds.  The morning flight had Rob and Ian duelling for an hour, and Bob catching a great low save over the town.  The afternoon flight was actually hard going due to sheets of cirrus cutting out the sun.  Nevertheless, most stayed up for over an hour, with Rob and Simon managing a small out an return along the valley.

A quick evening flight in the decaying conditions, notably with Chris getting a little soaring in, after having flown the earlier flight with me on the tandem.

So that is it for another year for us.  For sure our best ever year with almost every week fully booked and no serious accidents (just a few strains).   It was especially nice to have this last good week (6 flyable days) with the Sussex group who had such poor weather with us in May and who are such good company through bad and good weather.

Tomorrow we will be moving back into our house which will be nice, and have the hope that by next season our house at the bottom of the big spine will be ready for us to move into.

For a week or two over the winter I hope to arrange a tour to La Palma (Canary Islands) or maybe Andalucia depending up on interest.  La Palma works a little like Tenerife in that it is a very high island which blocks the strong trade winds.  It is also much prettier and unspoilt than Tenerife.  An Andalucia trip would be as other trips…no set itenery, just going to the areas or Andalucia which have the best weather at that time (There can be a big differnce between East and West).

Next year I will probably be organising the Spanish nationals in early July and the XC Open World Series the first week of September.   There is also a posiblility of the British Nationals here for the 10th time in either August or July.  By December we should have our calendar sorted out for 2009 bookings when we have confirmation of competition dates.  We will send out an e mail to our client database when we do this.

Thanks one again to all who came this year, and hope to see you all again next year.

4 Responses to “The last day this week and 2008 season. Very nice thank you.”