A valid task at last. 90km and beyond Plasencia 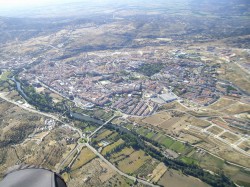 The final task for the GO, with light NNE winds but a poor blue ceiling of around 2200m. A 92km task along the N110 to the west, over the Tornavacas pass, through the Cherry tree valley and beyond Plasencia. The gaggles moved very slow and cautiously towards the pass. So slow in fact that I was the first to the antenna after Barco, waiting for some company for the trip down Cherry valley. Amazing how some threw themselves over the pass with hardly any height at all. I only went with 2000m, but others seemed to lift their legs to get over the low point at the road. I wend down the south side, though some went straight to the lee sided slopes north of the road. 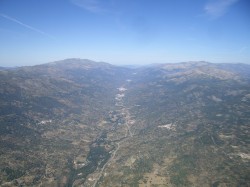 Quite tense flying as we never really go much above the tops, and of course the landing options are not so good for the first part of the valley. Half way along, many pilots crossed to the leeside from the south side. I followed, more out of curiosity to see what the alpine pilots do in these circumstances…they get a good whacking, and I wish I had stayed on the windward side. After about 10km in the lee, I got a good climb putting me on the outskirts of Plasenica. I flew quite high along the south side, hoping for a good climb, but was probably too mesmerized by looking at the Cathedral and town to concentrate on the climbs and ended up bombing just after some 15km from Goal. 15 pilots in goal and plenty of hassle finding pilots spread around Plasencia. Back in town for 11pm, but now we have to wait till 2am for the prize giving in the main square during the rest break of the band.