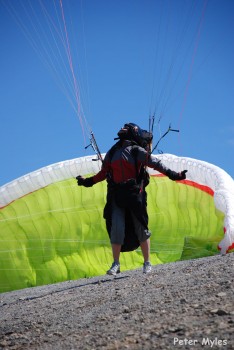 The forecast today was not really suitable for a task, with increasing winds from the W and low cloudbase. The only viable task to get pilots to a goal would be a task to the Ambles Valley towards Avila, but the danger of crossing the pass ruled that out. An elapsed time race was set (with 20minute gates) towards Peñaranda de Bracamonte as a safer alternative in the flats.

Abundant lift in front of take off encouraged most of the field off, but strong NW winds in the valley made progress hard and the task was finally stopped at 3.50, allowing the task to be validated with the 90 minute after race rule . However, although a race, it had varous gates more like an elapsed time. I am unaware of the German rules, but normally it needs to be a race with one start to be valid for stopped tasks. Let us hope it is so as the German league are having terrible luck with not one task validated this year.