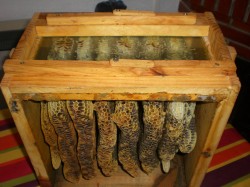 Today I made my first harvest from a Warre hive. The hive was the very first I set up, using a conversion board to allow the colony set up in a framed Langstroth hive to grow down into the smaller Warre box. After filling two boxes, the colony seems to have slowed down its development, and also from the debris tray below it is the colony most affected by Varroa.

Although much of the Warre idea is to allow the bees to defend themselves more easily from parasites such as varroa, allowing free building comb and better temperature regulation, I am reluctant to see colonies perish in this first year of the experiment and am prepared to assist them if possible by the more ecological treatments for varroa.

Through the window is was possible to see that the top box almost certainly had no brood, and also a much lower number of bees than a few weeks ago. The colony had certainly swarmed (unfortunately not into any of my bait hives), which may have been a product of their high varroa infestation. The hive had 3 boxes, but with no growth to the bottom box. Earlier in the week I made up a clearer board from Bernhard´s excellent web information. (//www.selbstversorgerforum.de/bienen/sustainable_beekeeping.pdf)

This I placed below the top box on Tuesday afternoon, and today (Wednesday), was able to remove the top box with only ten or so bees on the combs of the top box. I replaced over the remaining box a plastic mesh (small holes which the bees can close with propolis and which prevents them from knawing the sack cloth of the insulation quilt). The original cloth on the harvested box was fully closed off with propolis. Since I aim to use a formic acid treatment from above I needed a new mesh allowing entry of the formic acid vapour.

Although the box full of natural comb and honey was heavy and had no support of frames or wire, it seemed quite stable even when carried at various angles in the high temperatures we have at the moment (30 degrees C plus).

Although some of the combs crossed many top bars, I found the best way was to lever up the top bars (previously held by gimp pins, but reattached after without the metal pins, using just propolis), then whilst holding the top bar over a bowl, I used a serrated knife to uncap and cut the comb into the bowl. After each top bar comb was in the bowl, I cut and crushed a little more before transferring it to my mesh filter for draining.

I estimate after draining the first honey was sealed in jars within 10 minutes of cutting the comb. I will compare this drained honey taste with the spun honey of last year later today. I imagine it will be most of the nigh until the most of the remnants of honey are fully drained.

This evening with our meal with our guests I have chilled a couple of bottles of Mead from last October. Hopefully it will be sufficiently aged now. Also I may try a taste test with them for the drained Warre comb honey and the Langstroth spun honey. 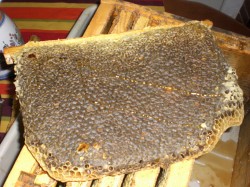 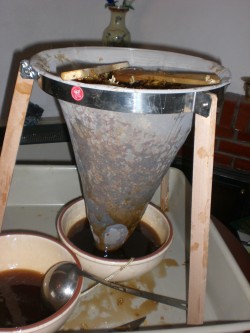