We let that one go! 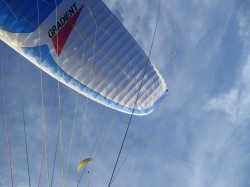 A good forecast with a potential big distance flight, but with gnarly strongish winds at launch. We decided to give it a miss, even though 5 paragliders had launched (though demonstrated how windy it was out there). We plumped for an evening flight down the valley, some to the Villafranca junctions, but other sucked into the Long Bar with the promise of beer.

Tomorrow should be good with lighter winds and this new air mass moving in, demonstrated by the good Cu´s this afternoon.

This evening Alexander Kirk Wilson arrived with his two little dogs…….not a good thing for Fred. Also Peter arrived and flew his first tandem with me.