Probably the final Warré transfer of the year. 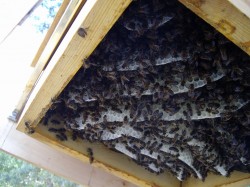 One of the splits form some months back is in a rather disorganised Langstroth hive, with a good number of bees but little brood as yet. Because it is unlikely I will get a harvest from them this year, I want them to go into winter in a home better organised by them, rather than the collection of old and new frames over two brood boxes.

I did the transfer to the Warré a little different than others. Previously I had been using the funnel, and shaking the frames into the top of the hive, then shaking bees clinging to the onto a cloth ramp leading to the entrance. In this instance I used a normal brood box with top bars with no starter strips and below a brood box with a hatch behind to put in a feeding bowl. All bees were shaken from the frames onto the ramp leading into the entrance.

Although each frame was checked before shaking, I was unable to see the queen or see her run in. On three frames there was uncapped brood, so I can assume a queen is present in the colony but has only recently began to lay.

After all the bees had entered and had clustered in the top brood box I opened the hatch and introduced a bowl with one frame of comb cut from their own provisions. I will continue to feed this colony back all their own honey to hopefully, rapidly establish them before the onset of winter.

During the morning I also added a box below one of the other Warrés which had now almost completed 2 boxes. Graham gave me a hand stabilizing the lift. Graham had tried to get involved in top bar beekeeping last year, but had been put off not just top bar beekeeping, but generally beekeeping by the club at Milton Keynes.