An exciting time for Steve Meadows 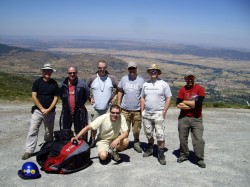 Conditions looked quite calm and stable for a late start today, very much suiting the Dunstable boys who had been out drinking heavily the night before. What looked like a struggle to stay up soon turned into excellent conditions with 3m average climbs and peaks of 5m with light winds. I noticed Steve on his Nova Ra leaving the climb at the bottom of the big spine on his way out to land at Piedrahita, the hang over being too much for him to carry on. A short time later after most of the group had climbed out Steve had a bit of an epic cascade on his glide out, and came down on his reserve in a nice field at the bottom of the big spine.

Most of the rest of the group finished around Villafranca, but Adam had a great climb out of the Quarry spine, and subsequently with me at the Cemetery. Unfortunately Adam landed at the Antenna near the pass after grappling with the climb there. I had maybe 50m more and was able to climb out, but landed with Adam at the Antenna.

An afternoon of tea, beer and reserve packing, as southerly winds came in to ruin the evening flight.