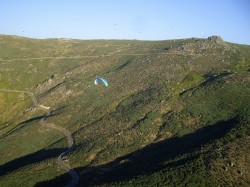 Our new group, mainly from Ireland, missed the Sunday evening flight as things to to strong with a Cb to the north, although people had flown in the morning.

Today we had a good morning flight with very light NE winds, with good climbs over the town. The XC flight started when we reached around 2500, where there was an inversion. I flew with Simon on the tandem (recovering from a broken leg, so has not bough a wing this week, and is in need of soft tandem landings!). We broke through the inversion just north of Lastra with a climb touching 8m/s. As I had left my radio in the field on the morning flight, and my batteries had gone down on the back up radio, we landed at Barco for the usual ice cream.

The evening flight gave quite stable air with climbs barely above the top in moderate winds. Hotter weather is forcast with air from the sahara…..not the best thing really