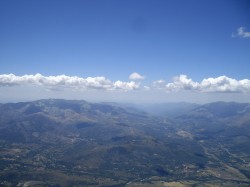 Very light winds from the north with good climbs of up to 5m/s and a base over 3000m. After flying down to the Cherry tree valley pass (Puerto de Tornavacas), Dave Shaw unfortunately landed, after flying very well and ahead. By this time the Cu was fantastic along the Bejar range and would have allowed an out and return way towards the West. Anyway, but this time, everybody else landed at Barco or before, so I flew back to join them.

During the evening flight I did two tandems, one with a girl whose boyfriend has almost forced her to fly. One of the worse tandems I can remember as she became very ill and almost fainted. The conditions were so good it was hard to get down, and after flying most of the way out with big ears I still got to over the landing fields near take off height.

One Response to “Epic July conditions”