Take off shuffle and 63kms 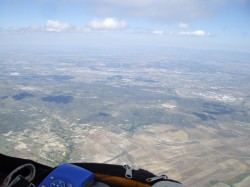 Quite a strong north east wind, with ourselves nicely protected in the lee of the Gredos range, but with some problems on choosing the right take off to use, as both SE and W launches were crossing. We finally got off late, and after scratch climbs, things soon became easy with climbs to well formed Cu at around 2400m. The task was essentially a zig zag down wind with 3 turn points and goal some 20km south west of Talavera. Shifting winds made things a little difficult, with winds low down moving from north through east and west to south. Craig Morgan was first in of perhaps 50.