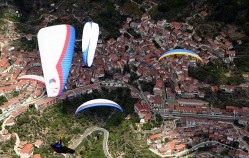 An enjoyable first task for the British Nationals, but unfortunately invalid. After a long wait at take off for the cloud to rise, and after a number of task changes (possible Cbs on course) we finally opted for a 10km cross wind leg out into the valley then a downwind some 30km. Along the mountains there were large congestus clouds, some dumping rain as they moved into the valley. Unfortunately when we were on final glide to goal, and only 8km away, rain was falling heavily on the goal area so the task was cancelled. However, fun was had by all on what felt like a very British task with its light conditions, and two thirds of the competitors landed together in the same village short of goal. Today looks a lot better.