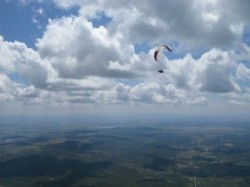 After much task changing and revision, we finally decided to run a task out to the south then west to just north of Talavera de la Reina, then back to the mountains for a final run along them into goal, 72.5km in total. A really fantastic flying day, with quite large Cu but light winds. As well as following roads, the task benefited from a tail wind all the way around……not common in closed circuit flights. Craig Morgan was the pilot most often in front during the day, but the last turnpoint was on the edge of a large rain shower from over development coming from the north over the big peaks of the Gredos. This put the last 15km in shadow making a for a very long final glide with no thermals to top up. Craig pushed on into the shadow low and landed short. The rest of us following just squeaked into goal, the day won by Kai Coleman (I came in 12th amongst the first group).

A highlight of the day was to see the hills to the south of Talavera, which I have been looking at for years on maps to understand the dispositions of the British and French forces during the Battle of Talavera 200 years ago, one of the key battles during the Spanish war of Independence. If Wellington could have seen it from where we were!

Further good weather to come………lucky us.