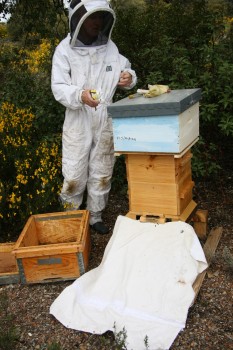 Windy weather and low cloud, but some breaks of sunshine. No flying but an opportunity to make some artificial swarms in some of my hives on the north of the Valley near Tortoles. It is very likely that they would swarm next week with the arrival of the forecasted warm weather, and since I will be on the other side of the Gredos mountains in Pedro Bernardo (for the British Paragliding Nationals) I will not be around to chase and retrieve the swarms. To avoid loosing so many bees and to help with populating my Warré hives I decided to divide those populous colonies showing signs of imminent swarming. The indication of this is quite easy: If there are a number of queen cells build up, especially if capped. The queen cells are the extended peanut cells.

Khobi and Jan from South Africa came and helped me. //www.cloudbase.co.za/index.php?comp=content&op=view&id=30.

They have a number of hives on their property in Wilderness and with missionary zeal I have been trying to convert them to the Warré method of beekeeping. 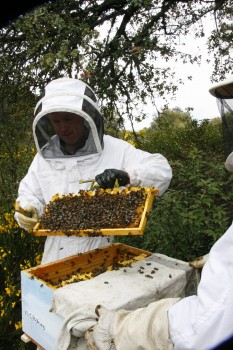 The forest track up the mountain to the apiary was closed as there was a grader improving the track, so we had to carry all the equipment up, having to leave the hive lift in the van.

The lavender is in full bloom now and the commercial beekeepers have now brought their Layens hives up from the south of Spain so my bees have plenty of competition when out foraging.

We did two splits on hives which where populous with enclosed queen cells. One was just the removal of 8 frames of bees (including honey frames, brood and queen cells) to another Langstroth box (leaving the old queen in the original), and a slightly more complex split of a Langstroth to Warré grow down. This hive was a

populous framed Langstroth hive which I placed over a Warré brood box in March, hoping it would grow down. On the 29th of April an extra Warre Box was added, and today, both Warré boxes were full of bees so I decided to add another Warré below, and to remove the Langstroth box above to form a new colony. 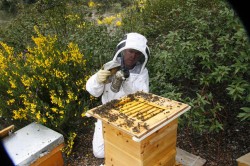 The frames from the Lang were removed to another Lang box, each one checked to ensure the queen was not present. A number of enclosed queen cells were present on those frames, and I also removed one to hook onto the top bars of the Warré below to ensure they had a queen just in case I accidentally killed her during

the manipulation. The new box with the frames was taken to a new position and the old Lang box and converter board removed, shaking bees onto the ramp in front of the Warré entrance. A mesh and the quilt (a sort of insulating cover filled with wood shavings) now covered the hive and a new box was added below the two originals. 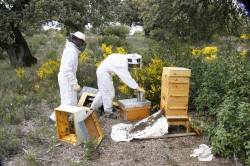 One of the pictures shows the bees running up the ramp back into the hive. Now I have a wholly Warré hive with 3 boxes, and hopefully the framed hive moved to the other position will soon have a mated queen and start to lay. In a few weeks I will check again to see if this is the case, and if so, if I have not filled my available Warré hives with colonies, will transfer them to a new Warré hive. 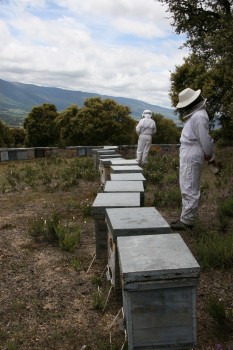 3 Responses to “Some Splits”