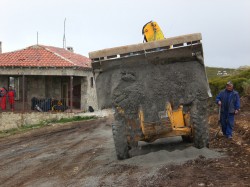 You can read a little more about the long history of problems with the take off (see the PDF article Piedrahita, the first 500 years). The promise of reconditioning the launch area was made nearly two years ago now, but due to a change in political groups in the town hall and lack of money, things have been taking a long time. In 2006 the Town Hall of Piedrahita paid the owner’s association of Santiago de Collado 15,000 euros. This is to cover the rental of the take off for 5 years. This is an extraordinarily high price for approximately 1 hectare of scrubland, whose annual rental value for livestock would be less than 10 euros. In the contract the town hall are obliged to make the take off optimal for the sport and repair the bar, which over the years has been vandalised. 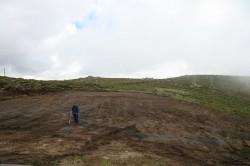 The original take off comprises of the large area below the road, and the area enclosed by fences above the road, including the bar and car park. The landowners dispute that the area below the road was ever considered by them as a take off (even though they received money to clear it by hand in 1993) and since the Windmill crisis on the early part of this century has been fenced off on a number of occasions. ¨Natural attrition¨ has taken the fence down on each occasion and lower take off is still in use and valuable for light wind take offs (much steeper than that above the road) and for busy comps. 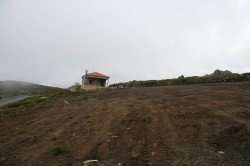 I have been listening to complaints and suggestions from pilots for 14 years on how best to recondition the take off. There are many problems with the obvious suggestions.

Getting grass to grow is almost impossible at that altitude and lack of water. The Piorono Serrano ( a broom like scrub with yellow flowers) is the only thing that flourishes after clearing. Astro turf/sports stadium carpets would be the obvious choice, but are very expensive to buy new, but in the future would be the ideal solution if we could find a stadium changing their matting. What has been done at the moment is to remove all the larger rocks and level the current surface with soil (maintaining its gradient) and cover it with stone chippings. A trench has been made above the take off slope to divert rain water to the sides to prevent erosion.

It is likely that there will be problems with this system. Maybe much of the gravel will go down the slope. There maybe granite dust for a while, which will be annoying on windy days. However, snagging microlines on rocks and bushes is a thing of that past so we should thank the town hall for this start on improvements and hope they will continue in this manner.

One Response to “Peña Negra repairs.”