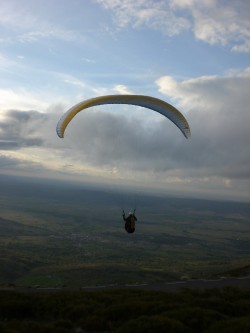 Wednesday gave us some showery conditions. After an early flight, we only managed an evening flight when things had calmed down. Dave got to fly the new Airwave Sport 4 which we have in as a demo(see photo), and Steve is on his second day now of demoing the Niviuk Hook. Today, Thursday, with threats of increasing winds and rain we got to the hill early and had a nice early thermal soaring flight, but with evidence of increasing winds in the clouds coming in from the West. After everybody had landed I went over and landed next to our field, just to do a swarm check……it being a warm day after many cool days. True enough there was a swarm clustered at way high in one of the Ash trees. Yesterday I had noticed a lot of commotion in the Apiary as if swarming were soon to happen. For the second flight things were a bit more boisterous at take off. Remko, Kieth, Wayne and Dave all had good thermal flights in the local area, though with the threat of increasing winds we flew only in the local area, not risking the venturi effect of the pass. During the afternoon I had some help by the pilots in doing some splits of the beehives. This is effectively artificially swarming the hive. Since the hives are at the point of swarming, this is a way of getting a new colony without the risk of the swarm flying off. We split 2 hives one using David Heaths method (which you can see more of on //www.mygarden.me.uk/ModifiedAbbeWarreHive.htm. ). One of the hives I belive had already lost it´s origional queen to the swarm which exited this morning. Luckily, we were able to see a queen hatching from a queen cell which we were able to introduce to the ¨possible queen-less part of the split¨. In the photo you can see the empty queen cell, which looks a little like a peanut shell, and the little exit hatch that the virgin queen has nibbled open.  Below it you can see a Drone emerging. 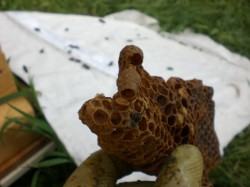