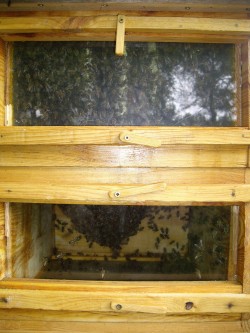 Cbs from 9am so no flying today. There were plenty of sunny spells, but the Cbs soon filled in again. Nature walks for some of the group. Myself and Jamie checked on the progress of my Warré hives in Zapata. Two which had drawn comb throughout their first box were provided with fresh boxes below. This is done without smoke or stress to the bees by lifting it with a lifting device (held stable by Jamie), then slotting the new box in underneath. The photo shows one of the colonies two hours later with a cluster of bees already hanging in the fresh box below – hopefully building comb. From the 7th of May last year many of my hive started swarming. This years things are running a little later in the fields. The leaves on the oak trees have only appeared this week, though now the broom on the hill is flowering upto around 1600m and the french lavender is now very strong. It is quite possible that when the storming weather passes, probably Saturday, the first prime swarms will start to emerge. I have 16 bait hives spread around the valley, and 12 in my Zapata apiary and 4 in the Tortoles apiary at 1500m. My hope is to populate 23 Warre hives (made up during the winter) to run an experiment with very low intervention beekeeping, keeping the bees in a more natural environment in which they can more easily combat the many pathogens which are rapidly reducing the worlds honeybee population.

2 Responses to “End of run of 16 consecutive days flying”